Skip to the beginning of the images gallery
STRAND, Paul.

with an appreciation by Milton W. Brown. [With:] three handmade Christmas or New Year's greetings cards with original photographs by Strand. 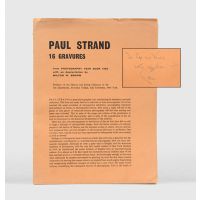 First edition, first printing, presentation copy from Strand, inscribed on the back wrapper "To Cipe and Will, with affection, Paul". An excellent association: Cipe Pineles (1908-1991) was personally installed by Condé Nast as assistant to M. F. Agha, legendary art director to the publishing group. "Through the 1930s and early 1940s, Pineles learned editorial art direction from one of the masters of the era, and became (at Glamour) the first autonomous woman art director of a mass-market American publication. She is credited with other 'firsts' as well: being the first art director to hire fine artists to illustrate mass-market publications; the first woman to be asked to join the all-male New York Art Directors Club and later their Hall of Fame" (American Institute of Graphic Arts, AIGA Medal citation). Her husband William 'Bill' Golden, was one of the young artists encouraged by her, going on to become art director of CBS, he died aged just 47 in 1958. She then married Will Burtin, also a designer, in 1961.

With a group of three warmly affectionate, chatty and discursive handmade cards. These carefully assembled constructs amount to something approaching artists' books a medium that would have resonated strongly with the recipients. They cover a friendship of several decades and a working partnership centred around the broadcast network CBS.

Autograph card (1951) illustrated with a photograph of the "Bronze Doors - Verona". Written in the hand of Strand's third wife, the photographer Hazel Kingsbury Strand and addressed to "Dearest people - Happy holidays, your first with the boy! How we wish we could see you with him!" (Pineles and Golden's son, Thomas, was adopted in March 1951); she goes on to discuss Christmas arrangements and that "Paul's work comes along and will be very swell - gentle & different book than the last but also interesting" (probably references to Time in New England (1950) and La France de Profil (1952), perhaps his most famous book).

Autograph Christmas card (1958) "Greetings from la Briardière" decorated with a photograph of a sampler made by Hazel Kingsbury Strand (carrying a quote from stanza 4 of Whitman's "I Sing the Body Electric" and a view of the house); addressed in Hazel's hand to Bill, Cipe & Tom (Pineles's adopted son with Bill Golden), opening "The time rolls around too fast - Have to retaliate now with our house - I can't draw & impossible to photograph as there are too many trees. So copied a sampler I made last winter which gives a rough idea"; and including a diagram of the house. Strand writes "Dear Cipe and Bill, are we still on your list? Do you still like us? Hope so, in spite of the long silence - and that you are busy, busy I hope to have the Scotch book ready for printing by next Spring, the big question: a publisher every good thing in 1958. Hazel's sampler is a beauty. It's a real Hazel. Be well, affectionately Paul". Strand moved to la Briardière at Orgeval, west of Paris, in the early 50s. The "Scotch book" is a reference to his record of the communities in the Outer Hebrides, published under the title Tir a'Mhurain by MacGibbon & Kee, but not until 1962.

New Year card (1974) on pale blue notepaper folded to make 4 pages, with original photograph of the Strands house at la Briardière attached, pictured in the snow. A few lines in red ink in the hand of Hazel Kingsbury Strand ("Paul has about 70 new negatives to print - But we are not as fast at getting things done as once we were"). The remainder by Strand, "Dear Cipe - so many thanks for your card with the articles bringing birthday greetings from you and from them - So long ago! And I guess even longer your lovely note with Herbert Spencer's attached. I am a very bad correspondent and worse as the years roll We thought that perhaps we would be able to be in London this Xmas and meet Alger and Isabel there Yes we would like to meet the Spencers when we get to London on our way (next Spring - maybe March) to New York. You will be pleased to know that I have been photographing and Hazel has been weaving. She makes pictures with the loom upstairs and I weave around in the garden Much love to you both - and much good in 1974. Paul". Strand here refers to the influential British typographer Herbert Spencer (1924-2002) and his wife Marianne Mols and Alger Hiss and his partner Isabel Johnson.

16 Gravures is decidedly uncommon: WorldCat cites copies at only four libraries (Yale, Currier Museum of Art, New Hampshire Institute of Art Library and Harry Ransom). Presentation copies of Stand's publications are scarce, particularly so with such a fascinating provenance.

16 black and white illustrations on 8 plates.