Skip to the beginning of the images gallery
HAWKING, Stephen.

From the Big Bang to Black Holes. Introduction by Carl Sagan. Illustrations by Ron Miller. 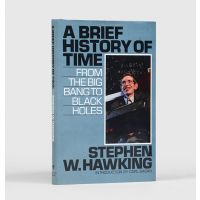 First US edition, second issue, of this masterpiece of scientific popularization; an impeccably provenanced copy, with Hawking's thumbprint signature on the title page and a typed letter signed on Hawking's Cambridge stationery from his assistant Andrew Dunn, gifting the book for Christmas 1989 and discussing textual differences between the printings as well as Hawking's dispute with Paul Steinhardt and Andreas Albrecht.

An astrophysicist by training, Dunn was Hawking's assistant for several decades; biographer Kitty Ferguson records him as still in the role in 1997 (p. 363) and in 2009 Dunn helped Hawking to revise A Brief History of Time for the 2009 Random House edition. He is thanked in the Acknowledgements, listed alongside Hawking's team of assistants, nurses, secretaries, colleagues, friends, and family as one of those who has "enabled me to live a very full life and to pursue my research despite my disability". Dunn was a member of the Cambridge Institute of Astronomy. He co-authored the paper "Structure and dynamics of the coma cluster" (1996) with Matthew Colless, contributed - alongside Hawking - to Ferguson's work on black holes (CUP, 1996), and was also the Associate Producer of the Life in the Universe digital project.

Dunn writes to the recipient, "Alan", whose identity remains unknown: "Whilst I was talking to Melanie recently, it ocured sic to us that you would probably enjoy a first edition copy of Stephen's 'A Brief History of Time'. Better still, I've got Stephen to thumb-print it. I chose the American edition partly because it was published there first, but also because the paragraph at the bottom of page 131 was changed in later editions in order to remove the implication that Steinhart sic and Albrecht 'stole' one of Stephen's ideas (this was done in response to a threatened libel case from Steinhart and Albrecht)." The Steinhardt-Albrecht-Hawking controversy, and the tense circumstances leading to this particular paragraph's excision from A Brief History, is well documented by Michael White and John Gribbin. In the next paragraph Dunn discusses in detail the publisher's recalling of the "very first printing" and the myriad textual differences found within it and subsequent printings, demonstrating a good understanding of the variants and referring to a comparison of copies conducted by himself and Sue, likely fellow assistant Susan Masey. He closes with "In any case, with Stephen's thumb-print, this has to be a fairly rare copy I hope you like it".

One of the most important scientific works of the 20th century, A Brief History details for a lay readership the origin and eventual fate of the universe. The first US edition was published simultaneously with the UK edition on 1 April 1988. The error-riddled first printing of the former was recalled and destroyed, though a small number survived. It has gray-blue endpapers, lacks the contents page and the dedication statement on the copyright page, shows a number of figures incorrectly ordered or labelled, and has a silvery light-blue dust jacket, similar in colour to that of the UK first edition jacket. The second printing has white endpapers, the contents page and dedication present, corrections made to the figures, and a dark blue dust jacket. There are several textual differences and a different ISBN was assigned.

Octavo. Original black cloth-backed black boards, spine lettered in silver. With the dust jacket. Together with a typed letter signed on University of Cambridge departmental letterhead, from the office of S. W. Hawking, Lucasian Professor of Mathematics, from Andrew M. Dunn, dated 19 December 1989 and signed by Dunn in blue ink.

Illustrations and diagrams throughout.