Skip to the beginning of the images gallery
RICH, Adrienne Cecile.

With a Foreword by W. H. Auden. 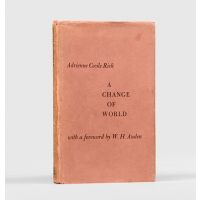 First edition, first printing, with the ownership inscription of fellow poet Anthony Thwaite, dated "London 1953", to the front free endpaper. Thwaite (b. 1930) is a poet, literary critic, and notably the literary executor for Philip Larkin. He studied at Christ Church, Oxford and, in 1953, whilst still an undergraduate and a year after Rich herself was in Oxford studying on a Guggenheim Fellowship, he published his first pamphlet with the Fantasy Press.
A Change of World was Rich's first published work, following two extremely rare privately printed juvenile collections, and was issued as volume 48 of The Yale Series of Younger Poets when she was 21. The first printing was done in a small run of 551 copies, with a reprint in the same year of a further 503 copies. The Yale Series of Younger Poets Competition, founded in 1919, is an annual event which publishes the first collection of a promising American poet. Auden chose the winners and edited the series between 1947 and 1959, and his foreword to this work praises the potent modesty of Rich's verse: "Poems are analogous to persons; the poems a reader will encounter in this book are neatly and modestly dressed, speak quietly but do not mumble, respect their elders but are not cowed by them, and do not tell fibs: that, for a first volume, is a good deal." This somewhat patronising praise belies the radical energies for which Rich would ultimately be remembered. Her New York Times obituary (Margalit Fox, 28 March 2012) hailed her as "a poet of towering reputation and towering rage, whose work distinguished by an unswerving progressive vision and a dazzling, empathic ferocity brought the oppression of women and lesbians to the forefront of poetic discourse and kept it there for nearly a half-century".
An excellent early assocation copy of Rich's first book, with an appealing connection to an emerging poet.