Namely, the Seven Mu'allakat, and Poems by al-A'sha, an-Nabighah, and 'Abid ibn al-Abras. Edited for the first time, from the MSS., of Cambridge, London, & Leiden by Charles James Lyall.

Calcutta, Printed for the Asiatic Society of Bengal at the Baptist Mission Press, 1894 Stock Code: 118904
£1,250.00
On display in 100 Fulham Road
Add to Wish List View Wishlist
By the same author 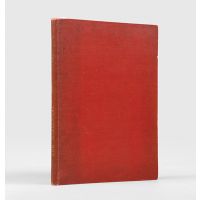 First edition, in the original Arabic, of this authoritative commentary on the Mu'allaqat and three further Arabic poems from the pre-Islamic period; the poems themselves are printed in full, with the commentary between each line. Al-Tibrizi (1030-1109), a native of Tabriz in Iran, "was a philologist, a great authority on poetry For a time he was a teacher in Egypt, then he moved to Baghdad where he taught at the Nizamiyya Academy until his death. According to a report given by Yaqut, he was addicted to wine and often drunk when teaching; apparently this did not impair his scholarly reputation He wrote several highly respected commentaries on ancient poetry, such as the Mu'allaqat" (Encyclopaedia of Arabic Literature, vol. 2, p. 440).
The editor, Charles James Lyall (18451920), was a senior administrator in the Indian civil service, and, "notwithstanding his formidable official duties, also established himself as one of Britain's foremost scholars of Eastern languages. At Balliol he had distinguished himself as a student of Hebrew, and from there he moved on to Arabic, Persian, and Hindustani His chief devotion, however, was to the early, pre-Islamic, literature of the Arabs, and on this subject he published a number of works" (ODNB). He compiled this work at the request of Cambridge Arabist William Wright (18301899), who needed a poetry textbook for his students.
This copy has been profusely annotated by a contemporary hand writing in English and in highly accomplished Arabic, providing variant readings and additions from a manuscript "F.", apparently as an advanced scholarly exercise: these annotations have themselves been marked up in pencil referring to various secondary sources such as the Lisan al-'Arab and Wright's Grammar of the Arabic Language, and a pencilled note on the final page 164 reads "Collation finished 13/3/95". An intended supplement of critical notes appears to have never been published.