Skip to the beginning of the images gallery
LE ROSSIGNOL, Ethel.

A series of psychic drawings given through the hand of Ethel Le Rossignol as an assurance of survival after death. This sequence of designs is shown to open the eyes of all men to the glorious world of spiritual power which lies about them. 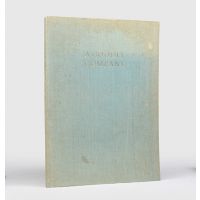 First edition of this scarce, privately published work which beautifully presents the psychedelic spirit paintings of the Argentinian-born medium and automatist Constance "Ethel" Le Rossignol (1873-1970).
Le Rossignol ('The Nightingale') remains a mysterious figure, with very little known of her life. By 1891 she and her family had moved from Argentina to Kensington; she studied art and shared a studio with three others, including the Arts and Crafts jewellery designer Sarah Martineau; she served as a nurse during the First World War (for which she was awarded the British War Medal and the Victory Medal); she became a medium in 1920; and in later life she married Arthur Beresford Ryley (likely the author of Old Paste London: Methuen & Co. Ltd., 1913, an illustrated history of jewellery).
During the 1920s and early 1930s Le Rossignol painted a series of 44 psychic works - the "Goodly Company" series - which she insisted were the true work of the spirit "J.P.F." whom she channelled. They offer "remarkably consistent, kaleidoscopic visions of the spirit world in the 1920s", depicting in vivid detail "a radiant, ecstatic realm populated by flying human sylphs, base demons and bejewelled animals" (Pilkington). They were exhibited in 1929 by the London Spiritual Alliance and the reaction was positive; the show, initially planned for ten days, was extended for three months. Le Rossignol set out to explain the meaning of the series in this large-format, self-published book - of which 500 copies were printed - pairing text written in the form of a diary (the first entry dated 20 February 1920) with her fantastical illustrations, seven of which are rendered in their intensely vivid original colours. It was reissued by Eyre & Spottiswoode in 1958. Although reviews praised the luxury of the book's production, some critics judged the illustrations as technically inferior, though they conceded that there is a "William Blake-like quality about some of them"; Blake at his "mystical maddest" (Psychic News, 21 June 1958, p. 4).
The majority of Le Rossignol's paintings, plus copies of the present work, were eventually donated to the College of Psychic Studies in South Kensington. An exhibition of her work took place in March 2014, the first time her paintings had been shown outside the College.
We cannot trace any copies of the 1933 issue on WorldCat or Library Hub; WorldCat locates three copies of the 1958 reissue (New York Public Library, British Library, and University of Notre Dame, which also holds her papers and wartime correspondence). Just three have appeared at auction.
Inviting comparison with the work of other acclaimed spiritualist artists such as Georgiana Houghton (1814-1884) and Hilma af Klint (1862-1944), "Le Rossignol's distinctive style, which includes an Oriental touch, certainly deserves further study" (Introvigne).

Cloth sunned and foxed with a few marks and small patches of dampstain. A very good copy, the contents crisp and clean, the colours remaining especially bright.