Skip to the beginning of the images gallery
HOLLINGBERY, William. 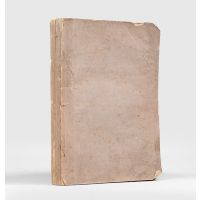 First edition of this very scarce account of the Deccan and its rulers, that area of southern India that included the state of Hyderabad, with a focus on the life of the ruler Nizam Ali Khan, Asaf Jah II (1734-1803), who had recently assisted the British in the Fourth Anglo-Mysore War, which concluded with the death of Tipu Sultan at Seringapatam in 1799. "One of the earliest instances of historical writing conceived in the midst of the struggle against the French and the ruling house of Mysore in southern India is William Hollingbery's History, published in 1805, of the Nizam of Hyderabad, a ruling house that became allied by treaty to the Company. Hollingbery dedicated his work to the two most distinguished men in the military and diplomatic service at the time, Col. William Kirkpatrick and Lt. Col. John Malcolm. In many ways his was a 'firsthand' account, Hollingbery having served at the British Residency at Hyderabad and also in the embassy led by Malcolm to the kingdom of Persia... his History is a compilation of several accounts, including the Persian chronicle of Ferishta and the works of Orme and Henry Vansittart, as well as original documents, but the main purpose of the narrative is to provide the context and explanation for the British military campaigns: Mughal power wanes in the south because of the 'fatal error' of emperor Aurungzeb's destruction of the smaller Muslim kingdoms in his failed attempt at military conquest, leading to the rise of the Marathas and other predatory regimes such as Hyder Ali in Mysore, which not only emply European soldiers in their armies but seek the assistance of the French as rivals to the British. The prominent points of the history are the English alliance with the Nizam (once provincial governors of the Mughals) against the threat of Tipu SUltan, war against the Marathas, the eventual destruction of the French subsidiary force and thus the Jacobin threat in southern India, and the great subsidiary treaty with Hyderabad, a cornerstone of Wellesley's new pax Britannica" (Sudipta Sen, Distant Sovereignty: National Imperialsim and the Origins of British India, 2002, pp. 49-50).

Hollingberry (c. 1767-1831), was a member of the close knit staff that accompanied Sir John Malcolm when the latter was appointed envoy to Persia in 1799; his account, A Journal of Observations Made during the British Embassy to the Court of Persia in the Years 1799, 1800 and 1801, was published in 1814. Malcolm's biographer notes that "Hollingbery was a protégé of William Kirkpatrick, and later wrote frequent letters to him from Persia" (John Malcolm, Malcolm: Soldier, Diplomat, Ideologue of British India, 2014).