A History of the English-Speaking Peoples. 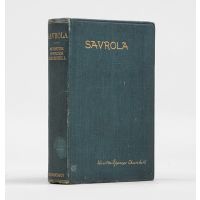 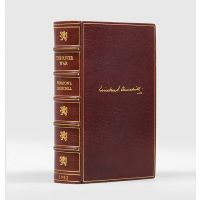 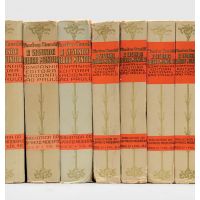 [A History of the English-Speaking Peoples, in Swiss-German] Geschichte.

First editions, first impressions, signed by Churchill on the front free endpaper of volume I, "Winston S. Churchill"; with an intriguing provenance: from the library of the influential society hostess, the Marchioness of Londonderry, wife of Churchill's cousin, Charles Vane-Tempest Stewart, seventh marquess, who "had once been effectively a protégé of his older kinsman" (ODNB).

The first volume bears the striking bookplate of Edith Helen Vane-Tempest-Stewart, Marchioness of Londonderry (1878-1959); subsequently presented to her daughter, Lady Helen Maglona (1911-1986), inscribed by the latter below Churchill's signature, "given to Helen by mother 1958". At the outbreak of war in 1914, Edith was appointed colonel-in-chief of the Women's Volunteer Reserve, resigning her position in 1915 to establish the Women's Legion, "an organization designed to train women to release men for active service; initially providing cooks for the army, it developed administrative and clerical branches, and an agriculture section, in which she took particular interest" (ODNB). She was the first woman to be appointed DBE (Dame Commander of the Order of the British Empire, Military Division) upon the Order's establishment in 1917. Her beautifully designed and engraved bookplate incorporates the glamorous portrait by Philip de Laszlo showing her in uniform, against a background of elements of the work of the Women's Legion. Edith was a friend of Churchill, who frequented her "exclusive weekly club" at Londonderry House on Park Lane (ibid.). She called this the Ark and regulars adopted the names of animals, although Churchill was christened Winston the Warlock; Edith was Circe, named after the Greek enchantress who could transform her enemies into animals. "Edith Londonderry was widely recognized as the last great political hostess, possessing 'a perfect house, great personal popularity, untiring energy and a very deep-rooted interest in things political' (Pall Mall and Globe, 25 Oct 1925)" (ibid.).

Churchill and Edith remained friends despite the sympathies of her husband Charles, seventh Marquess of Londonderry (1878-1949), whom Harold Nicolson described as "Hitler's friend" (cited in ODNB). Churchill had aided Londonderry's rise, having secured his nomination in 1919 as finance member for the air council. However, their relationship deteriorated - a prominent landowner, Londonderry squabbled with Churchill, then Chancellor of the Exchequer, during the General Strike; although Churchill influenced Stanley Baldwin's decision to admit Londonderry into the Cabinet in 1928. Between 1931 and 1935, as Secretary of State for Air, Londonderry supported re-armament, but also a rapprochement with Germany and an Anglo-German alignment, which Churchill, of course, strongly opposed. Londonderry "disagreed with Churchill over the intentions of the Nazi regime, and in the summer of 1939 they quarrelled bitterly over the value and integrity of French support (Churchill was a francophile). For these reasons, allied with his apparent courtship of the Nazi regime, Londonderry remained excluded from power when Churchill formed a government in May 1940" (ODNB). It was disagreements over German rearmament that led Churchill to describe the Secretary of State for Air as "that half-wit Charlie Londonderry" (cited in Ian Kershaw, Making Friends with Hitler: Lord Londonderry and Britain's Road to War, 2012).

Churchill began A History of the English Speaking Peoples, his history of the British Empire and the United States, during his period in the political wilderness in the early 1930s, but did not complete it until after his retirement in the late 1950s. The work proved a best-seller, bolstered by the international esteem in which the statesman was held, and by his award of the Nobel Prize for Literature in 1953.

Covers of volume I showing evidence of damping, perhaps as a consequence of which segments of the original jacket have been "saved" and pasted to the rear endpapers (a near-fine jacket has been supplied). The other volumes are all in near-fine condition, the jackets with light spotting and very minor shelfwear.