Skip to the beginning of the images gallery
MOORE, Sir Jonas.

or, Useful Practices in Arithmetick, Geometry, and Astronomy, Geography and Navigation, Embattelling, and Quartering of Armies, Fortification and Gunnery, Gauging and Dyalling. Explaining the Logarithms, with new Indices; Nepair's [sic] Rods or Bones; making of Movements, and the Application of Pendulums; with the Projection of the Sphere for an Universal Dyal, &c. The Second Edition, with many large Additions. 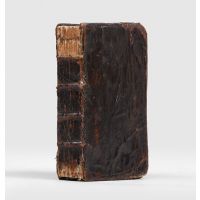 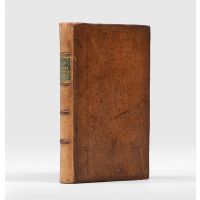 Second edition of this popular pocket-book, first published in 1674. "The book was intended to be sold with various mathematical instruments, some made by the author Nicholas Stephenson (a gunner in the Tower), who must have had Moore's sanction as his assistant to use his notes" (Taylor). "Stephenson was also deputed by Moore to compile the Royal Almanack (annually, 1674-8), a strictly non-astrological almanac containing astronomical tables by John Flamsteed, tide-tables, and other practical information" (ODNB). As a boy Jonas Moore, (1627-79), "became a clerk in Durham city" (Taylor), but resolved to follow a career in mathematics, in which ambition he was encouraged by the prominent local Shuttleworth family of Gawthorpe Hall. Brought to the attention of Charles I "when the king was in the north, he was appointed mathematical tutor to the Duke of York, but almost immediately the young prince had to leave the country". Moore published his first book"an Arithmetic" in 1647, and sometime before 1649 he moved to London and with the assistance of William Oughtred - "the figurehead of English mathematics" (ibid.) - established himself as a mathematics teacher. In 1650 he was appointed surveyor to the Duke of Bedford's fen drainage company, an advancement to which Moore "later attributed his rise in the world". On his return to the capital he set up in "Stanhope Street, on the fashionable western side of London" as a teacher of mathematics and supplier of books and instruments. Among the subjects offered was fortification, and in 1663 he was sent out with the expedition to Tangier surveying for the projected Mole. During the Second Dutch War, Moore was appointed Surveyor General of the Ordnance, "one of the principal officers of the Board of Ordnance, with particular responsibility for incoming stores and fortifications, duties which were burdensome only in wartime; Moore undertook them himself rather than appointing a deputy. From 1665 he lived near the Tower of London and from 1669 in an official house in its grounds. The Third Dutch War (1672-4) placed heavy demands upon the office; meeting them helped earn Moore his knighthood". He made his home in the Tower "a centre of scientific observation, mathematical practice and patronage, the last most notably in bringing forward the young John Flamsteed and furnishing him with with instruments as well as encouraging Edmund Halley" (Taylor). At the time of his sudden death in 1679 he was preparing a textbook for the royal Mathematical School at Christ's Hospital, of which he was governor. His library of over 2000 volumes, two thirds of them mathematical, made over 400 when sold in 1684. An important, if under-remarked, figure in the English early modern scientific world, he was described by his friend John Aubrey as "a good mathematician and a good fellow".

Contemporary manuscript notes to front free endpaper and occasionally elsewhere, early ownership inscription of John Harrant (or ffarant) on title (another crossed through). Binding worn, spine defective at head and tail, boards held by cords, contents lightly and evenly browned, waterstain to lower outer edge of first few leaves, a few marks elsewhere, still a good copy of a book that has seen practical use.