Skip to the beginning of the images gallery
OWEN, Robert. 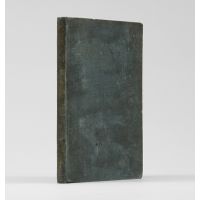 The Book of the New Moral World:

First edition, first issue of the four Essays, one of 40 specially bound presentation sets printed on thick paper, parts III & IV "Not published", inscribed "From the Author" on the first blank.
Edouard Dolléans states that just forty copies of A New View of Society were bound for presentation: "En écrivant les Vues nouvelles, Owen a surtout pour objet de gagner à ses idées les membres les plus hauts placés de l'État et de l'Église; il fait relier richement par les plus habiles ouvriers quarante exemplaires des Vues nouvelles" (Dolléans, Owen, p. 145f).
A New View of Society is "Owen's first and most important published work, containing the principles upon which he based his educational and social reforms at New Lanark, an account of their application there, and an outline of the means by which his theories might be applied to the nation as a whole. The first Essay dedicated to Wilberforce was written in 1812 and published anonymously, after it had been submitted to Francis Place for revision... The second Essay was published in the same year, the third and fourth were privately printed and circulated during 1814, not being published until two years later" (Goldsmiths' Owen Exhibition). It is considered "the first practical statement of socialist doctrine" (PMM).
The work states clearly Owen's view of social development, stressing his egalitarian educational doctrine. At the New Lanark industrial settlement Owen erected a large new building, the 'Institute for the Formation of Character', which was to contain public halls, community rooms and above all schools for the children at work in the factory, and with a nursery school (what Owen called a 'playground'). The educational work at New Lanark for many years excited the admiration of visitors from all over the world. The 'Fourth Essay' of the book contains proposals at national level, including a universal state educational system, a Ministry of Education, colleges for training teachers, a system of state-aided public works, and the gradual abolition of the poor laws.

Extremities and boards expertly refurbished with a few tiny abrasions to joints, the contents crisp and clean, a fresh, wide-margined copy.

The Book of the New Moral World: