Skip to the beginning of the images gallery
[WARD, Seth.]

Immortality of the souls of men. Truth and authority of Scripture. Together with an index of the heads of every particular part.

Oxford: Printed by Leonard Lichfield, and are to be sold by John Adams and Edward Forrest, 1652 Stock Code: 136679
£650.00
On display in 100 Fulham Road
Add to Wish List View Wishlist
By the same author 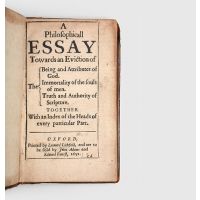 First edition. This was the first book (excluding his contribution to the 1644 volume Certain Disquisitions and Considerations) published by Seth Ward (1617-1689), then Savilian Professor of Astronomy at Oxford, later bishop of Exeter and of Salisbury. The Essay is on the nature of God and the soul in general, but also constitutes an extensive refutation of the materialist philosophy of Thomas Hobbes, as set forth in Hobbes's Leviathan, which was first published the previous year. "The treatise itself dealt with the being and attributes of God, the soul's immortality and the truth and authority of scripture, and Ward claimed that he had composed it several years previously. Towards the end of his prefatory remarks, Ward suddenly digresses into a topical attack upon Hobbes, drawing attention to the philosopher's denial of the existence of incorporeal substances, a position at odds with Ward's orthodox defence of the soul's immortality. What follows is a carefully structured rejection of Hobbes's authority" (Parkin, Taming the Leviathan, 2007).

This marked a change in Ward's thinking towards Hobbes, a writer he was previously on good terms with - Ward had written an adulatory preface to Hobbes's Humane Nature in 1650 (although the preface was signed by the printer Francis Bowman). Ward was one of various individuals linked to Hobbes who made sure to distance themselves from the philosopher following the controversy engendered by Leviathan's publication. Ward continued and developed his criticism of Hobbes in 1656 with his In Thomae Hobbii philosophiam exercitatio epistolica. Walter Pope recorded that relations were so soured between Ward and Hobbes over these publications that if the former came into a room, the latter would immediately leave, meaning that they never again had a conversation, even though Ward himself desired to (Pope, The life of... Seth, lord bishop of Salisbury, 1697, p. 118)

Three further editions followed in 1655, 1667, and 1677 respectively. This first edition is quite well-represented in British institutional holdings (17 copies located on ESTC in the British Isles), but less so in North America - ESTC locates only four copies in North American institutions, in the Huntington and Clark libraries, and in the universities of Toronto and Yale.

With the book label of bookseller and bibliographer John Stephens (1948-2006) to the front pastedown. Extremities worn, contents a little browned, small chip not affecting text at head of pp. 3/4, chip with loss to pp. 149/150 and tear affecting text to pp. 151/152. An acceptable copy.