Skip to the beginning of the images gallery
CARRÈRE, Joseph-Barthélemy-François.

being a Description, Moral, Civil, Political, Physical and Religious, of that Capital; with Sketches of the Government Character, and Manners of the Portuguese in General by a Gentleman Many Years Resident at Lisbon. 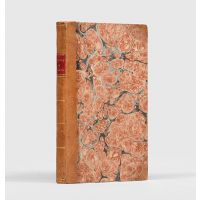 First edition of this timely English translation of Carrère's 1798 Voyage au Portugal et particulèrement Lisbonne. Evidently rushed onto a market craving information on Portugal following Soult's invasion in January 1809. It was variably received at the time: The Monthly Review correctly identifying that it was "derived from a French source", and suggesting that "the blacking brush" has been "very liberally" used due to personal "resentments"; the Critical review was more complimentary considering that the author has "imparted a considerable share of information respecting the city... in a manner both perspicuous and amusing"; the Eclectic siding rather with the monthly, "a hasty translation of some insignificant French revolutionary writer... raked out of deserved obscurity". In this last assumption however, the reviewer is entirely wrong. Carrère (1740-1802), formerly professor of anatomy and surgery at the University of Perpignan, was in 1773 appointed inspector-general of the mineral water sources of Roussillon and Foix. He moved to Paris the following year, becoming royal censor in 1775 and Médecin du Garde-Meuble de la Couronne in 1776. He was appointed associate of the Société Royale de Médecine de Paris in 1779 and in 1780 he resumed and completed his wide-ranging research on all the mineral waters of the kingdom at the request of the Société. Importantly, he was also consultant doctor to Louis XVI. On the outbreak of the Revolution Carrère fled to Spain, and then to Portugal, concealing his identity for fear of arrest as a French spy. (see Maria Zulmira Castanheira's comprehensive study "Joseph-Barthélemy-François Carrère's Tableau de Lisbonne, en 1796 (1797) in English Translation" inTRAlinea Special Issue: Translating 18th and 19th Century European Travel Writing, 2013; retrieved 08/04/2020).

It does not seem to have been a great success, few copies traced, just 9 locations institutionally world-wide, and a single copy of the second edition of 1811 at auction, which to all appearances is a reissue with a cancel title - now "by an Inhabitant" - and a small coloured Luffman map of Portugal added as a selling point, cashing in on late developments in the Peninsula. The present copy with a superb provenance coming from the library at Mount Stewart, co. Down, the Londonderry seat, and with the engraved bookplate of "Major-General Sir Charles Stewart", Stewart was promoted major-general 25 July 1809. Charles William Stewart (1776-1854), later Vane Stewart, third Marquess of Londonderry served in the Corunna campaign during which he commanded a cavalry brigade. After the retreat to Corunna and the death of Sir John Moore, the army returned to the Peninsula under the command of Sir Arthur Wellesley, later the duke of Wellington, who appointed Stewart as his Adjutant-General, an administrative job not much to Stewart's liking, however he did manage to see action at Talavera in July 1809, and for this service he received thanks of Parliament in February 1810. He also distinguished himself at the Battle of Bussaco in September 1810, and at Fuentes de Onoro in May 1811 where he took a French colonel in single combat.