Skip to the beginning of the images gallery
LIVINGSTONE, David.

together with the autograph letter of transmission from Livingstone's sister, tipped into a copy of the first edition. 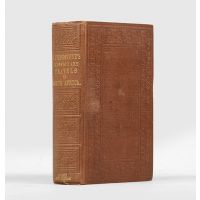 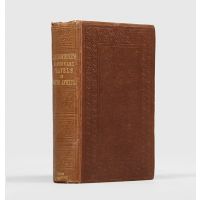 A remarkable fragment, the only portion of the original manuscript of Missionary Travels known to remain in private hands. We understand that all other manuscript material is held in the John Murray Archive at the National Library of Scotland. Together with an autograph letter signed from Livingstone's sister, sending the manuscript fragment, and a copy of the first edition.

The holograph manuscript is on blue laid paper watermarked "Thomas James", possibly a correction or revision slip, measuring 152 x 197 mm, and reads in full: "12th May. As we were about to start this morning the commandant Sr. Arsenio provided bread and meat most bountifully for my use in the way to the nearest station, and sent too militia soldiers as guides instead of our Cassange corporal who left us here. About midday we asked for shelter from the sun at the house of Senhor Mellot at Zangu and though I was unable to sit and engage in " This 15-line section is published on page 383 of the first edition. The National Library of Scotland confirms that among the papers used in the original manuscript is blue paper watermarked "Thomas James".

On 12 January 1892, the manuscript was sent by Livingstone's sister Janet (1818-1895) to "my dear Mrs Metzler", with an accompanying 2-page autograph letter signed, addressed from Castle Lodge, Kendal, discussing her health and her meeting with Mrs Metzler at the popular Scottish watering-place of Wemyss Bay. "The bit of manuscript enclosed, for your dear boy, was written by Dr. Livingstone in 1857 for his first book 'Missionary Travels'". A full transcript of the letter is available on request.

The recipient of Janet's letter may be a relative of the German missionary Peter Martin Metzler (1824-1907); if this is the case then Mrs Metzler is probably the wife of one of his four sons. Metzler worked mainly in the Middle East, with a brief sojourn in East Africa in 1851. While in Mombasa he fell seriously ill and by the end of the year had returned to Germany. (This item emerged in Germany.)

The book itself is a first edition, corresponding to SABIB's variant 7. The frontispiece and plates facing pages 66 and 225 are woodcuts by Whymper and the extra leaf numbered 8* and 8+ is present, corresponding with Bradlow's variant 3. As many as 11 variants of the first edition are known and a reliable order of precedence has never been established. It is now accepted that "the only thing that can be said with certainty is that the issue with the extra leaf numbered 8* and 8+ is not the first issue" (Bradlow). The extra leaf contains information on Moffat's mission at Kuruman and on Livingstone's marriage and the upbringing of his children, and Bradlow could only speculate as to the reasons for the interpolation: "Why did Livingstone decide to have the extra leaf after page 8 inserted? Did he feel that he had neglected his wife by not mentioning her in this way in the first place? All these questions and a host of others will occur to trained bibliographers and it may well be, that, in the future, some indefatigable researcher will find the answers."

Missionary Travels is one of the emblematic accounts of African exploration in the 19th century and the foundation of the Livingstone legend. It describes the first of his three major expeditions, "in which he followed the Zambezi, discovering Victoria Falls in the process, as well as the Shire and Ruyuma rivers, ranging from Angola in the west to Mozambique in the east During these years he explored vast regions of central Africa, many of which had never been seen by white men before" (PMM). It was also "an instant commercial success. The initial print run of 12,000 copies sold out through pre-publication subscriptions, while second (8,000 copies) and third (11,000 copies) printings followed quickly on its heels. Later printings reportedly brought the sales total to 70,000 for the first two years. Such figures were almost unprecedented for a work of exploration and ensured Livingstone's place alongside earlier celebrated British explorers like James Bruce and Mungo Park" (livingstoneonline.org).