Skip to the beginning of the images gallery
WOMEN'S EDUCATION - The Association for Promoting the Education of Women in Oxford.

Oxford: printed for the Association by the Printers to the University [six issues with the imprint of Horace Hart; the last five with that of Frederick Hall], 1894-1919 Stock Code: 124133
£3,000.00
On display in 43 Dover Street
Add to Wish List View Wishlist
By the same author 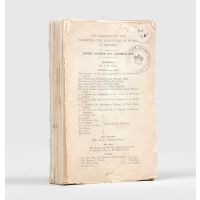 WOMEN'S EDUCATION - The Association for Promoting the Education of Women in Oxford.

A set of important reports published by the pioneering Association for Promoting the Higher Education of Women (AEW), containing a mass of historical information relating to the state of women's education in Oxford at the height of the suffragette agitation. The earliest is dated 1894-95, the latest 1918-19; each spans from October of one year to the same month of the next. They form an interrupted run due to the absence of two issues (1900-01 and 1910-11). The reports are scarce in any sequence. Library Hub and Library Hub trace runs at the London School of Economics and the British Library, and the society's papers and publications are held in the Bodleian, deposited in the Library in 1975.

The question of women's suffrage, and its particular relevance within the structures of the University of Oxford, had been a topic of frequent discussion in Oxford prior to the formal debate on the subject at the Oxford Union on 19 February 1880. The work of societies like the Oxford Women's Liberal Association (OWLA) and the Women's Emancipation Union, plus the activism of Florence Davenport Hill, who had been a founder member of the Bristol Women's Suffrage society in 1868 and had since moved to Headington, paved the way for the existence of groups like the AEW (and, later, the Oxford Women's Suffrage Society). Founded in 1878, the AEW sought "to establish a system of lectures to be conducted with general reference to the Oxford examination of women over 18 years of age which had been introduced in November 1875. The question of the higher education of women had been debated for some years previously The council and officers of the AEW laid down general rules for the conduct of students and their attendance at lectures, and made itself responsible for arrangements with tutors and payment of fees, and for the negotiations by which University Examinations were gradually opened to women" (Salter & Lobel, unpaginated). The organization's work led to the founding of four women's colleges: Lady Margaret Hall and Somerville opened in 1879, followed by St Hugh's in 1886 and St Hilda's in 1893. St Anne's also originated as part of the AEW, catering for female students who lived with private families in Oxford while attending courses run by the society. The AEW counted the activist Eleanor Smith (1823-1896) among its founding members and Annie Rogers (1856-1937), Oxford's first woman don, as a secretary. The presidents of the Association during the run of the present reports were, successively, Rev. T. H. Grose; the Master of Balliol College (later referred to as Dr Edward Caird, also a founding member of the Glasgow and West of Scotland Association for Women's Suffrage); Arthur Sidgwick; and William Martin Geldart. Officers named in the first report (1894-95) include the President of Magdalen, the Provost of Oriel, the Dean of Christ Church, and the Misses Wordsworth, Maitland, and Moberley (Principals of Lady Margaret Hall, Somerville College, and St Hugh's Hall, respectively).

Excepting some slight format changes, each report begins with a list of the AEW's officers, followed by a note from the Secretary, and then the report proper. Perhaps the most significant sections are those titled "General Statistics", which provide precise, itemised accounts of lectures attended by students, tutorial arrangements, results of examinations, donations and subscriptions. The report of 1917-18 also provides valuable commentary on the "extension of the University Parliamentary Franchise to women who, being British subjects and not subject to any legal incapacity, have attained the age of thirty, and have been admitted to and passed the final examination, and kept under the conditions required of women by the University the period of residence necessary for a man to obtain a degree at Oxford, marks a very great advance in the status of Women University Students. It was not opposed in Parliament or in the University, and every facility for registration has been given to qualified women. They are registered on specially favourable terms, as the Act admitting them is so drafted that the fee of 1 for registration cannot be required of persons who are not graduates. The Register contains at present the names of 409 women. It will ordinarily be made up to the last day of Trinity Term and of Michaelmas Term. Qualified women who have not yet been registered should send in their application to the Registrar as soon as possible."

The AEW continued its activities until November 1920, when it dissolved itself as the University, by admitting women to membership, had made itself responsible for them.

Each issue complete, with stamps, shelfmarks, and labels of the Education Department Library, latterly the Board of Education Library. Overall a scarce survival in very good condition. Shelfwear and creasing to wrappers, those for the earliest issue detached; rear wrapper for the 1909-10 issue torn but no loss.

WOMEN'S EDUCATION - The Association for Promoting the Education of Women in Oxford.