Skip to the beginning of the images gallery
SALT, Henry.

executed under the orders of the British Government, in the Years 1809 and 1810; in which are included, an Account of the Portuguese Settlements on the East Coast of Africa, visited in the course of the voyage; a Concise Narrative of Late Events in Arabia Felix; and some particulars respecting the aborginal African tribes, extending from Mosambique to the borders of Egypt; together with Vocabularies of their Respective Languages. 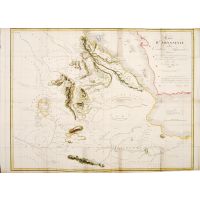 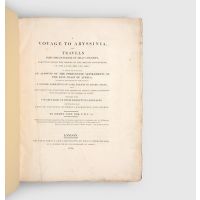 First edition of this handsomely illustrated and important 19th-century account of Ethiopia. In 1802 Salt accompanied Viscount Valentia on a tour of India, Ceylon, and the Red Sea, serving as his secretary and draughtsman, and in 1805 was sent by him on a mission to the ras of Tigré, "whose affection and respect he gained, and with whom he left one of his party" (ODNB). In 1809 his knowledge of the region led to his being selected by Canning to act as a "quasi-official envoy marching from the Red Sea coast with an escort of 160 bearers to explore trade and diplomatic links with the Ethiopian emperor Wolde Selassie. Britain fearing a French alliance with Egypt, wished to secure a port on the Red Sea" (Howgego). While in the country he made detailed observations on the geography, the customs of the indigenous peoples, and the flora and fauna, returning with numerous specimens, including a previously unknown dik-dik. He also carried out "a little archaeology, discovering in Aksum three large limestone tablets engraved with ancient Ethiopian inscriptions" (ibid.). His mission yielded little by the way of concrete results, but on his return Salt "became a fellow of the Royal Society and of the Linnean Society, and a correspondent of the Institut de France. In 1812 he was elected one of the very few honorary members of the African Association in acknowledgement of information he had procured in its interest", and on publication the present work was "received with some acclaim" and earned its author 1000.

Salt was an accomplished draughtsman and employed Charles Heath - "a pioneer in new printmaking techniques" (ODNB) - to engrave his sketches. "Salt's paintings of India have acquired monumental status, becoming a perpetual nostalgic reminder of the 'British Raj'. However his paintings of Abyssinia (Ethiopia) have not gained the consideration they merit" (Eyob Derillo, "Henry Salt and the Highlands of Ethiopia (Abyssinia)", British Library: Asian and African Studies blog, 10 December 2015, retrieved 6 January 2020).

With 6 folding maps, one hand-coloured, 28 engraved plates and 2 vignettes by Charles Heath after Salt.