Skip to the beginning of the images gallery
COOK, James, & James King.

Undertaken By The Command Of His Majesty, for Making Discoveries in the Northern Hemisphere. Performed under the Direction of Captains Cook, Clerke, and Gore, In His Majesty's Ships the "Resolution" and "Discovery"; in the Years 1776, 1777, 1778, 1779, and 1780. 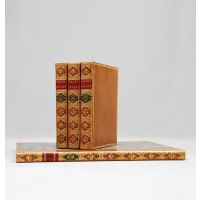 Second edition of Cook's fatal third voyage, an attempt to find a north-west passage, during which he "discovered" Oahu and Kauai at the western end of the Hawaiian Islands, and, more importantly, "depicted accurately for the first time the north-west coast of America, leaving no major discoveries for his successors. In addition the scientific discoveries in the fields of natural history and ethnology were considerable and the drawings made by the artists were of great significance. There are numerous statues and monuments to Cook in many parts of the world but the best memorial to him is the present-day map of the Pacific, which he did so much to shape" (ODNB). The brilliance of the illustrations based on work of the official artist on this voyage John Webber, cannot be over-emphasized. His sensitive portraits, spectacular landscapes, and detailed studies of the material culture of the peoples encountered captured the European imagination more than any other record of of the expedition, and shaped European perceptions of the Pacific world for many years to come: "no voyage undertaken in the days before photography ever returned so well documented with pictorial illustrations" (Bernard Smith, European Vision and the South Pacific, p109). The voyage culminated in tragedy with Cook's death in a meaningless skirmish on a Hawaiian beach, but the Hawaiian survey was completed in spite of this. Clerke then sailed once more for the Arctic in an unsuccessful attempt to complete Cook's instructions, in spite of the fact that he was dying of tuberculosis. Clerke died in sight of Kamchatka and it was left to John Gore to bring the expedition safely back to England. Interest in the story of Cook's astounding discoveries and his tragic death meant that the first edition sold out within three days, despite being priced at 4 14s 6d, perhaps equivalent to around 6,000 today. On the secondary market they had soon reached 10 guineas. The second edition has long been considered the best; the title pages are enhanced by the addition of the medallic "vignettes" of Cook's Royal Society medal, and a portrait medal of Captain King; and the text was entirely reset, Forbes pointing out that it was always considered "typographically superior." Thirty-five years after publication, Cook's widow sent a copy to her doctor with an inscription noting that "the letter press of the second edition is much superior to the first both in paper & letter press," the King's copy, held at the BL was also a second edition.

Text volumes with medallic engravings to the title pages and 24 maps, charts and coastal elevations, of which 14 of which are folding, folding letter-press table; folio atlas with 2 maps, one folding the other double-page, and 61 copper engraved plates.

Text volumes with some scattered foxing and light browning of, and offsetting from, the plates as usual, one of the coastal elevations in volume II more heavily so, the title page of volume I with unobtrusive narrow repair at the inner margin, stain in the upper margin of the last 10 leaves of volume II; the atlas with discreet embossed library stamp to the lower margin of all plates, some foxing and browning, one or two plates more heavily, overall a very good set.