Skip to the beginning of the images gallery
BLIGH, William.

undertaken by Command of His Majesty, for the purpose of conveying the Bread-fruit tree to the West Indies, in His Majesty's Ship The Bounty... including an Account of the Mutiny on Board the said ship, and the Subsequent Voyage of Part of the Crew, in the Ship's Boat... 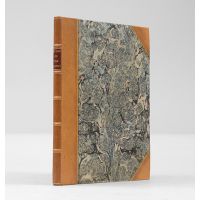 A Narrative of the Mutiny on Board His Majesty's Ship Bounty;

First edition of Bligh's own full account of his voyage which led to the most famous mutiny in the history of the sea. "An extremely important book" (Hill).

In mid-1787 Bligh received the command of the Bounty, then being fitted to transport breadfruit and other plants from the South Seas to the West Indies, part of an elaborate scheme to establish large-scale cotton cultivation in the West Indies by transplanting breadfruit and other fruits and vegetables so that plantation owners might feed slaves more cheaply. The Bounty reached Tahiti, loaded up with breadfruit, and set sail again at the beginning of April 1789. In the early morning of 28 April 1789, when off the island of Tonga, Fletcher Christian led part of the crew in mutiny. The rebels set Bligh and eighteen men adrift in the ship's 23 foot long launch, with little food and only minimal navigational tools. Incredibly Bligh managed to reach Kupang in Timor two months later with the loss of only one man, after a harrowing 3500 mile voyage.

Embarrassingly Bligh found himself having to defend his own conduct. He had already published a shorter Narrative of the Mutiny in 1790. The Advertisement explains that "the reason of the Narrative appearing first, was for the purpose of communicating early information concerning an event which attracted the public notice: and being drawn up in a hasty manner, it required many corrections". This is the first appearance of Bligh's account of the entire expedition. "This full account of the voyage, then, includes a slightly altered version of Bligh's own account of the mutiny, which had been published two years earlier. This extended and revised text makes this the fundamental published account of the Bounty saga " (Parks Collection). However, publication did not achieve his aim of rehabilitating his reputation, which was later further damaged by another mutiny and other serious insubordinations. History's verdict has overwhelmingly been that Bligh was clearly a superior navigator and a brave man, but an abysmal leader otherwise. Interestingly, it was his habit of intemperate verbal abuse that upset his subordinates: research has shown that Bligh actually flogged less than any other British commander in the Pacific Ocean in the later eighteenth century.

From the library of George Bennett FRCS (1804-1893), English-born Australian physician and naturalist, author of Wanderings in New South Wales (1834), with his armorial bookplate to front pastedown.

A Narrative of the Mutiny on Board His Majesty's Ship Bounty;