Skip to the beginning of the images gallery
FUNCH, Diderich Hansteen. 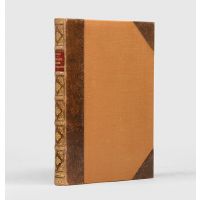 First and only edition of this work on the construction of merchant ships written by the renowned royal Danish shipbuilder Diderich Hansteen Funch (1791-1856). Decidedly uncommon, just four locations on OCLC, Royal Danish Library, BL, National Library of Sweden, and University of Leipzig Funch was master shipbuilder at the dockyards in Copenhagen, and established a reputation as an author with several well-respected works on shipbuilding. Divided into two parts, the first covering the hull, and the second masting and rigging. It "contains a complete system for the determination of all of a ship's calculated dimensions as well as its shape. The latter can be ascertained by consulting a table and following certain rules. Ships designed according to Funch's system had parabolic waterlines and curves; all the curves were mathematically determined. Funch's system seems to have influenced ship design in the provinces from about 1830 to 1845-50. Sheer draughts from the period show that the ships had parabolic curves as well as the fish shape prescribed by Funch. The interdependent proportions of the hull are also recognisable as the ones stipulated by Funch" (Nielsen). Attractively presented copy of this unusual and uncommon work.
With the bookplate of the Swedish shipbuilder Nils Ljungzell (1885-1964), professor of shipbuilding at the Kungliga tekniska högskolan, the Swedish Royal Institute of Technology from 1926-1942.

A little rubbed at the extremities, light toning, some spotting throughout, mild hygroscopic damp-stain in foot margin of the second part, plates unaffected. Library stamp of the Søe Officiers Archiw to title-page, deaccession stamps of the Marinebibliothek to both parts.