Skip to the beginning of the images gallery
(BRAZIL.) CARLS, Francisco Henrique. 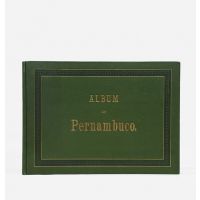 A wonderfully-preserved copy of this superb visual record of Brazil in the late 19th century. "The colourful and airy rendering contributes much to the appeal of this extensive series of images that forms one of the most comprehensive visual reports carried out on any Brazilian city in the period" (Correa do Lago).
The album was first issued in 1873 under the title Album de Pernambuco e seus Arrabaldes Album of Pernambuco and its Environs with 50 plates. It was subsequently reissued with varying numbers of plates, some copies having as few as 15 to 20, and with the composition rarely repeating. Carls was a German graphic artist, designer, and photographer who joined the wave of German immigration to Brazil, settling in Recife in 1859, and establishing there one of the first lithographic presses in Pernambuco, Casa Litographica. An enterprising and innovative printer, he took on a wide range of work, bringing the potential of high quality lithographic printing to advertising material, diplomas, stock certificates, letterheads, and also maps, being the publisher of José Tibúrcio Pereira Magalhães's Cidade do Recife e seus Arrabaldes the City of Recife and its Environs in 1870.
But it is for the present sequence of plates that he is best known. They comprise an inclusive collection of impressive views of the region: the public buildings (provincial assembly, presidential palace, the Hospital Pedro II), commercial streets (rua do Imperador, rua 1o de Março), grand private homes (the mansion of Dr. Augusto Frederico de Oliveira, which now houses the state museum, and the seat of the Portguese merchant João José Rodrigues Mendes, Barão Rodrigues Mendes, now the headquarters of the Pernambuco Academy of Letters), theatres, churches (mother churches of San Antonio and Boa Vista), shipping in the harbour, markets, and landscapes of the outlying villages and estates, all teeming with life, showing the signs of the accelerating modernisation of Brazil following independence, "a significant iconographic series for the visual memory of the country, depicting scenes of everyday life, customs and landscapes" (Silva, p. 1567).
A collaboration with German-born artist Louis Adam Cornell Krauss, who arrived in Recife in 1877, it has been suggested that the plates incorporate, uncredited, the work of pioneering Brazilian photographers such as João Ferreira Vilela, Alfredo Ducasble, Guilherme Gaensly (Wilhelm Gänsli) and Augusto Stahl. Certainly a number of the views do exhibit a sharpness of detail that hints at the use of photographic reference, and some bear a close resemblance to images produced by these Brazilian pioneers: for example, the view of Recife from the observatory of the Naval Arsenal is very similar to Gaensly's framing of the same subject, and the plate of the Sete de Septembro bridge bears comparison with Vilela's views. When the Pernambucan organising committee for the Berlin South American exhibition of 1866 included one of Carls's albums, they did so in the belief that this would present the German public with an "an idea of the beauty of our city".

Landscape quarto (300 x 420 mm). Original green cloth, title gilt to the front board within a broad black stylised floral panel between two single gilt ruled panels, the black panel repeated on the lower board, edges lightly marbled, floral-pattered endpapers in sepia, the title in German neatly inked in purple in a contemporary hand to the first blank, small bookbinder's ticket of Wilhelm Bitz, Basel, to the lower fore-corner of the front pastedown, dated August 1885 in the same hand. Housed in a dark green flat-back cloth box by the Chelsea Bindery.