Skip to the beginning of the images gallery
OGILBY, John.

America; being the latest and most Accurate Description of the New World …

Collected from most Authentick Authors, Augmented with later Observations, and Adorn'd with maps and Sculptures. 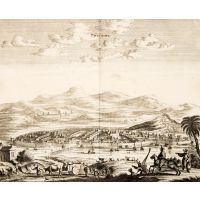 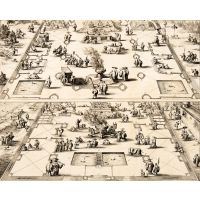 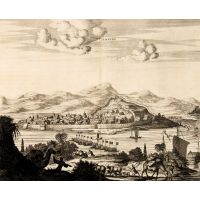 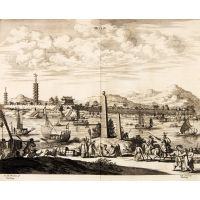 First edition, second issue. The third in Ogilby's series of "Atlases" intended eventually "to cover the whole world, to be funded through lotteries, subscription plans, and advertisements. The first, Africa, appeared in 1670. Others followed soon after: Atlas Japannensis (1670), America (1671), Atlas Chinensis (1671), and Asia (1673). These were not the fruits of Ogilby's own work but rather well-produced compilations of extant translations and others' accounts, a common practice at that time. His and others' work in this sense thus both reflected and directed growing public interest in distant places and foreign peoples" (ODNB). Ogilby was all but wiped out by the Great Fire, but refused to be defeated, as Aubrey described; "the generall and dreadfull conflagration burn't all that he had, that he was faine to begin the world again but he had such an excellent inventive and prudentiall witt, and master of so good addresse, that when he was undon he could not only shift handsomely (which is a great mastery), but he would make such rationall proposalls that would be embraced by rich and great men, that in a short time he could gaine a good estate again, and never failed in any thing he ever undertooke but allwayes went through with profits and honour" (Brief Lives, 1898, p.103).

The bulk of Ogilby's America is taken from Arnoldus Montanus's De Nieuwe en Onbekeende Weereld, published at Amsterdam the same year, supplemented with information on New England, New France, Maryland, and Virginia supplied to Ogilby by the proprietors of these colonies. There are three issues of the book. The first had Dutch maps and views, replaced in this second issue by a number of important maps drafted from English materials, the plate list from the first issue is retained and calls for two items omitted from this issue; the "Arx Carolina" (Fort Caroline, Florida) plate and "Virginiae pars Australis & Florida" map which are here replaced by "A New Description of Carolina by Order of the Lords Proprietors", and a map of Barbados is added. The plate list was reset for the third issue. A sound copy of this interesting compilation, the work of an intriguing and widely talented man; starting out as a dancing-master and courtier, Ogilby moved on to become a bad poet and translator of "creditable" versions of the classics, but it was his work as an enterprising publisher of well-illustrated works of geography that led to his elevation to the post of Royal Cosmographer in 1671, and which was to secure his long-term reputation. 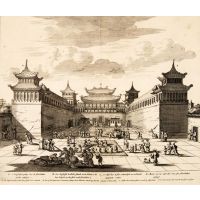 The Emperiall palace where the presents were received. 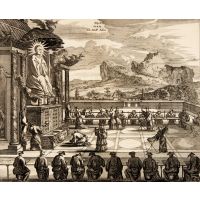 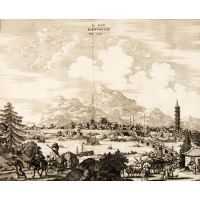