Skip to the beginning of the images gallery
(SECOND SINO-JAPANESE WAR.) 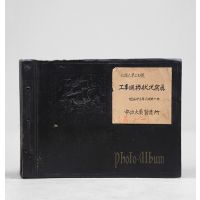 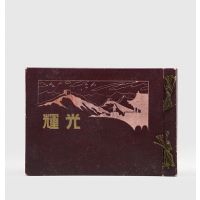 Showa 23-nen Shina Jihen shussei kinen shashincho :Hokushi sensen hen [in Japanese: A photograph album in memory of soldiers at the front lines during the China-Japan Conflict of 1937-1938].

An historically significant and fascinating album chronicling the progress of the construction of factories at Ningpo near Fuzhou for the manufacture, mixing, drying, and separation of smokeless yellow and brown gunpowder for the Imperial Japanese Kwantung Army during the Second Sino-Japanese War. Following their stunning victory in the Russo-Japanese War, Japan obtained control of the Kwantung Leased Area in the Liaodong Peninsula in Manchuria which was occupied by the Kwantung Garrison, in 1919 the Kwantung Army. A hotbed of the aggressive expansionist nationalist Imperial Way Faction, the Kwantung Army was implicated in a number of attempted coup d'états in Japan, and the manipulation of events in Manchuria, culminating in the Mukden Incident and invasion of Manchuria in 1931. Presented with a fait accompli on this scale, the Japanese Government had little choice but to back up the KA, providing reinforcements for the Pacification of Manchuria, resulting in the creation of the Japanese province of Manchukuo under the puppet emperor Puyi, but in fact ruled over by the local army commander. As over 150,000 Japanese settlers surged into Manchuria during the 1930s, the Kwantung Army expanded its sphere of operations and by the time of World War II would constitute a force of close to a million and a half men. This remarkable album documents Japanese efforts immensely to increase their munitions production for the Sino-Japanese War (1937-45). The project documented here was a vital part of the second five-year plan drawing on the vast mineral resources of the region.

The photographs are without exception clear and sharp, evidently the work of a trained photographer, who has shot the various buildings from different directions, angles and heights - employing the water-tower to offer an over-view - and has carefully docketed, captioned, and mounted the images in the album in such ways as to produce a comprehensive view of development across the site, over time, a sort of improvised time-lapse montage. Beginning in February, 1938, the photos depict the stages of construction of the bleaching factory, the powder pellet factories, warehouses, military barracks, the drying factories, fuse construction and storage facilities, the mortar shell assembly area, as well as the mixing factory with the powder mixing vats. The album follows the progress of the development from the pouring of the foundations, through the erection of the scaffolding, and the specific construction methods of the full range of brick, concrete, and timber buildings, even down to the creation of the protective earthen berms around the facilities, especially the drying factories and storage warehouses. Other parts of the facility shown are the workers' dining hall, the silk bag manufacturing plant, powder storage areas, fire station, the power substation, hospital, and the front gate of the main factory, guarded by Japanese soldiers and a military police station. The rapid development of this installation at Ningpo is indicative of the scope of Japan's expansionist ambitions, and of the efficiency of her military-industrial complex. The album represents an invaluable historical resource, visually compelling, heavily documented, and comprehensively indexed to this pivotal point in Asian, and in world history, as this local conflict folded into that which was to envelop the whole globe.

Tipped in at the beginning are 5 leaves of ruled ledger paper with a detailed manuscript index, page numbers lettered in red, followed by 30 leaves, mostly of thick black card stock, with a few of lighter black paper interposed, with 323 mounted original

Slightly rubbed with some more significant edgewear, one leaf neatly cut in half - evidently purposely, ?to use as reference - both parts present and complete, a few photos a little dog-eared, some detached with occasional minor creasing, but remains very good.

Showa 23-nen Shina Jihen shussei kinen shashincho :Hokushi sensen hen [in Japanese: A photograph album in memory of soldiers at the front lines during the China-Japan Conflict of 1937-1938].