Skip to the beginning of the images gallery
POINTER, John. 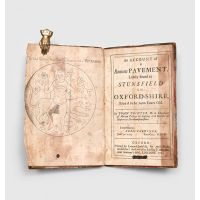 First edition of this treatise on the recently discovered Roman pavement in Stonesfield (using the archaic name Stunsfield) in Oxfordshire, by the antiquary John Pointer (1668-1754). A tenant farmer, George Handes, found the pavement in 1712, which attracted the interest of various antiquaries in nearby Oxford. However, Handes quarrelled with the landowner, Richard Fowler, over any profit to be had from the pavement, and is recorded to have destroyed the pavement in 1724. The somewhat crude frontispiece engraving of the pavement, which depicted the god Bacchus riding a panther, is consequently one of few records of what the pavement looked like.
"Pointer produced a variety of antiquarian studies and collections and was known also as a collector of natural and antiquarian objects. His circle of friends included antiquaries such as White Kennett, bishop of Peterborough, William Musgrave, and John Morton. In 1713 he became involved in a lively antiquarian debate with his successful first work, An Account of a Roman Pavement Lately Found at Stunsfield in Oxford-Shire, in which he attacked and poked fun at the interpretation of the pavement published by the Oxford antiquary Thomas Hearne in 1712. Pointer's conclusions about the iconography of Bacchus, the god depicted on the pavement, were correct and represented the opinion of the majority. Yet he felt the need to defend his work in an advertisement in the Evening Post of 1720. Hearne dismissed, not without some personal bitterness, most of Pointer's subsequent publications as of little importance. Pointer's critical judgement, however, is still accepted by commentators today" (ODNB).
Although quite well-represented institutionally, especially in Oxford, the edition is uncommon in commerce. With the armorial bookplate to the front pastedown of Alan Brodrick, 1st Viscount Midleton (1656-1728), Speaker of the Irish House of Commons from 1703 to 1710, and Lord Chancellor of Ireland from 1714 to 1725.

Obscured ownership signature at foot of title page. Binding a little worn around spine but all holding, contents browned as often, especially to fore edge of title page, a little closely cropped without loss. A very good, unrestored copy.