Skip to the beginning of the images gallery
(BEATTIE, James.) FORBES, Sir William.

Including many of his Original Letters. 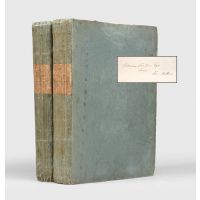 First edition of Forbes's principal work, an excellent association copy, inscribed on the front free endpaper to the author's son, "William Forbes Esqr. from the author"; together with a group of related contemporary autograph material laid in which reflects the strong ties between the Forbes and Beattie families.
Sir William Forbes, 6th Baronet of Pitsligo (1739-1806) was a prominent Scottish banker, philanthropist, and writer, and long-time friend of James Beattie. Forbes was the dedicatee of a number of Beattie's works and became the executor of his will upon Beattie's death in 1803, in which Beattie bequeathed "to my excellent friend, Sir William Forbes as a small memorial of our friendship, my silver watch, with a stop and second hand, made with particular care by Gartly, and also the two splendid volumes in quarto of Lavater's 'Physiognomy', which will be found among my other books" (II, p. 349). Forbes was also a friend of James Boswell (described in the Tour of the Hebrides as "a man of whom too much good cannot be said") and through him became a member of Samuel Johnson's literary dining club. The present biography of Beattie was republished in three octavo volumes the following year. At the time of publication the author's eldest son, William Forbes (1773-1828), was 33 years old. He was a lifelong friend of Sir Walter Scott, whom he famously usurped by marrying Willihemina Belsches, and he succeeded to the baronetcy as 7th of the title.
The original material laid-in enhances the copy's intimate association. Beattie's only surviving son Montagu died suddenly in 1796, a year after he painted the enclosed watercolour titled "Ruins of Pitsligo near Fraserburgh, from the N.W.". After his son's death Beattie, who was plagued by illness throughout his life, suffered a further decline in mental and physical health and resigned his teaching post in 1797. James Farquhar Gordon was a fellow executor of Beattie's will and, in his letter to Forbes dated 16 October 1806 (present here), he transcribed a section of it regarding the bequeathal of money to Beattie's brother David. Forbes published the contents of this letter as part of the Appendix to volume II. There are several other documents present, including two autograph notes in Forbes's hand (one containing transcriptions from a series of Psalms on the subject of mourning) and a single folded sheet of blotting paper used on Forbes's name as written on the front free endpaper.