Skip to the beginning of the images gallery
STAUNTON, George.

with notices of several places where they stopped in their way out and home… Taken chiefly from the papers of… the Earl of Macartney… Sir Erasmus Gower… and of the gentlemen in the several departments of the Embassy. 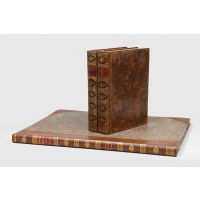 Second, corrected edition of the official account of the first official British Embassy to China, headed by George, Earl Macartney; the first edition was published the previous year. The failed embassy marked a historic missed opportunity in the relationship between China and the Western powers.
Macartney was dispatched to Peking in 1792 by a British government "anxious to establish formal diplomatic relations with China and thus open the way for unimpeded trade relations" (Hill). He was accompanied by Staunton, and a retinue of suitably impressive size, including Staunton's 11-year-old son. It emerged on arrival that the boy was the only one to speak Chinese, and was therefore the only person able to converse with the Emperor during the Ambassador's two audiences. The Embassy "sought to improve commercial relations with China, through Canton, and to establish regular diplomatic relations between the two countries" (Guangzhou). Though Macartney and Staunton had an audience with the emperor their proposals were rebuffed, and the party returned to Britain in 1794. Across the expedition the embassy travelled via Madeira, Tenerife, Rio de Janeiro, the Cape of Good Hope, Indonesia, Macao and St Helena, accounts of which "of considerable interest" are given in this work (Hill).
Young George Thomas Staunton became a writer at the HEIC's Canton factory in 1798, advancing to supercargo in 1804 and chief interpreter in 1808, and in 1816 he accompanied Amherst's ill-fated embassy to Peking as chief of the Canton factory. The artist William Alexander accompanied the embassy as junior draughtsman and this "enriching encounter with China" (ODNB) provided a source of inspiration for Alexander's future career; in 1808 he was appointed assistant librarian and first keeper of prints and drawings at the British Museum.

Text volumes skilfully refurbished, dampstain to top fore-corner of portrait of McCartney and vol. II title page, marginal dampstaining and foxing to only a few plates in the atlas, overall a very good set, clean and well-margined.