Skip to the beginning of the images gallery
MALTHUS, Thomas Robert.

or, a View of its Past and Present Effects on Human Happiness; with an Inquiry into our Prospects Respecting the Future Removal or Mitigation of the Evils which it Occasions. A New Edition, very much Enlarged.

Principles of Political Economy considered with a view to their practical application. 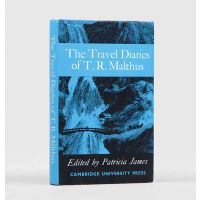 The Great Quarto edition, notionally the second edition of the Essay on Population published in 1798, but so substantially enlarged, rewritten, and re-titled as to be a new book.
"In 1803 Malthus published a greatly expanded second edition of the Essay, incorporating details of the population checks that had been in operation in many different countries and periods. Although nominally a second edition, it was regarded by Malthus as a substantially new work. He did not claim originality for the idea that population tends to outrun the food supply. In the preface to the second edition he stated that in writing the first edition he had deduced the principle of population from the writings of David Hume, Robert Wallace, Adam Smith, and Richard Price, but that in the intervening period he had become aware that much more had been published on the subject. He nevertheless believed that even more remained to be done, especially in describing the means by which populations are checked and in drawing out the practical implications of the principle of population.
In the second edition, he made clear what was only implicit in the first, that prudential restraint should, if humanly possible, be 'moral restraint'that is, delayed marriage accompanied by strictly moral pre-marital behaviour, although he admitted that moral restraint would not be easy and that there would be occasional failures. Whereas in the first edition he had said that all the checks to population would involve either misery or vice, in the second edition he attempted to lighten this 'melancholy hue' (Essay on the Principle of Population, 1st edn, 1798, iv) and 'to soften some of the harshest conclusions of the first essay' (2nd edn, 1803, vii) by arguing that moral restraint, if supported by an education emphasizing the immorality of bringing children into the world without the means of supporting them, would tend to increase rather than diminish individual happiness" (ODNB).

Principles of Political Economy considered with a view to their practical application.