Skip to the beginning of the images gallery
ERPENIUS, Thomas. 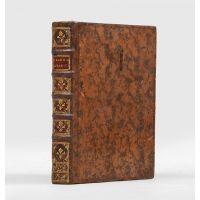 First editions of these two landmark studies of the Arabic language. From the library of Pierre Dippy (16221709), Maronite dragoman to King Louis XIV of France and chair of Arabic and Syriac at the Collège Royal in Paris from 1667 to his death, the title pages inscribed "Ex libris Pierre Dippy" in a contemporary hand (the name ineffectually struck out), the title of the Kitab al-Jarrumiyah additionally inscribed "1654". Both title pages are also inscribed in Arabic, "this is the book of Butrus ibn Diyab al-Halabi Dippy's Arabic name, dragoman to the King of France, may God have mercy on him", the Specimen further inscribed "and whoever reads this line, 1673". The formula "may God have mercy on him" is invariably used only of the dead, and the hand appears to be that of a native, so the inscription was likely added at a later date, perhaps by Dippy's nephew and protégé, also Pierre, who tried to succeed him in the Arabic chair at the Collège but was outmanoeuvred by Antoine Galland. There are also inked Arabic marginalia to page 13 of the Specimen, and to pages 12, 19, 25, and 115 of the Kitab al-Jarrumiyah, correcting or adding to the printed text in a fluent contemporary hand; the annotation on page 12 of the Kitab al-Jarrumiyah is closely trimmed, suggesting that the marginalia predate the 18th-century binding, and are likely to be Dippy's or an Arabist peer's. As the king's personal Arabist, Pierre Dippy was at the heart of the revival of the Franco-Ottoman alliance during the reigns of Louis XIV and Mehmed IV, and was official interpreter during the famous embassy of Müteferrika Süleyman Aga, whose sensational arrival in 1669 triggered a new wave of Turkerie across France.
Kitab al-Jarrumiyah, bound second here, is the first Arabic grammar published in the Netherlands. The work of the great orientalist Thomas Erpenius (15841624), first professor of Arabic at Leiden, it comprises his Latin commentary on the Ajurrumiyah, a highly influential medieval Arabic grammar by Moroccan scholar Ibn Ajurrum (d. 1327), together with the second edition of the original Arabic, and the first edition in the original Arabic of another text, the Mi'at 'amil (Hundred Rules) of 'Abd al-Qadir al-Jurjani (d. 1078), one of the texts which established Arabic grammar (nahw) as a discipline during the emergence of the madrasah. The Ajurrumiyah is "the most widely used primer in the whole history of Arabic grammar" (Meri, ed., Medieval Islamic Civilization: An Encyclopaedia, p. 300), and inspired countless epitomes and commentaries, of which Erpenius's edition was especially important: the first edition, published at Rome in 1592, was printed entirely in Arabic so "was by no means easily accessible to European scholars unfamiliar with Arabic linguistic terminology" (Vrolijk & van Leeuwen, Arabic Studies in the Netherlands, p. 32).
Specimen Arabicum is considered "the pioneering account of classical Arabic metrics" (Johann Heinrich Hottinger Loop, Arabic and Islamic Studies in the Seventeenth Century, p. 174). Prepared by Johann Fabricius (16081653), professor of Hebrew at Rostock, it contains the first editions of three highlights of medieval Arabic literature, with Latin commentary: the Maqamah al-San'a'iyah of al-Hariri (d. 1122), the first in his famous series of picaresque vignettes in rhymed prose; a poem by Abu'l-'Ala' al-Ma'arri (d. 1057) entitled A'an wakhd al-qilas (Speeding off on a Camel), part of his Diwan Saqt al-zanad (The Tinder Spark) written for Sa'd al-Dawlah, Hamdanid amir of Aleppo; and a qasidah by great Sufi poet Ibn al-Farid (d. 1234), Antum furudi wa-nafli (You are my Duties and Devotions). Fabricius based his work on the lectures and manuscripts of Dutch orientalist Jakob Golius, who succeeded Erpenius at Leiden

Several passages in the Specimen asterisked in the margins in a contemporary hand; frequent lightly pencilled marginalia in French and Arabic to both texts, late-18th or early-19th century. Variable mild spotting and browning, a few small ink-spots and other marks. Kitab al-Jarrumiyah: narrow worm-track to lower outer corners from title to sig. C2, occasionally reappearing but the text never affected, sig. S3 present in uncancelled state (lacking a line of Arabic text recto), the corrected cancel bound in between R4 and S1. Specimen Arabicum: minor paper disruption in gutter ff. 1-3 with loss of half a letter in f. 1 r., small worm-tracks to gutter from title to sig. F4, occasionally reappearing, and to upper margin sigs. A1-4, the text never affected, old restoration to lower outer corners of F3 and R4 (to partial loss of catchwords), lower inner corners of T1 & T4, and Z1 upper outer (to loss of pagination in the latter), extensive tear to S4 sometime repaired, the paper slightly misaligned and the text partially obscured but still easily guessed, small spill-burn to Cc2 obscuring a couple of letters recto. These flaws unobtrusive overall; a good copy that presents well.