Archive of retained correspondence from the files of his first publisher, Victor Gollancz, relating to the publication of Inside the Whale. 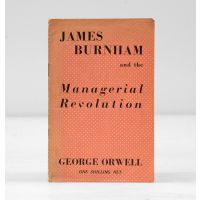 Victor Gollancz's archived correspondence relating to their publication of George Orwell's first collection of essays, Inside the Whale, including the original contract. Orwell began work on the essays in May 1939. The outbreak of the war led to an unproductive period, but by mid-December he had finished the book and sent the manuscript to Gollancz. Orwell uses a commentary on Henry Miller's Tropic of Cancer to discourse more widely on English literature over the last two decades.

The archive opens with a carbon copy of a letter from Gollancz to Orwell dated 1 January 1940, telling him how much he enjoyed reading the manuscript, and that he was in complete sympathy with the general political point of view, even though he disagrees with the pessimism. He asks Orwell to lend him his copy of Tropic of Cancer, a novel he had not heard of before. Orwell responds in a typed letter signed "Eric Blair" (his actual name) on 8 January 1940, telling Gollancz that he cannot lend him the book as his house had been raided for banned books after he was caught sending a letter to the proscribed Obelisk Press, and many were confiscated - the prosecutor allowed him to have his copy of Lady Chatterley's Lover back, but not Tropic of Cancer, probably as "Miller's books have not been in print long enough to have become respectable". Orwell says he will try and get Gollancz a copy from Cyril Connolly. Regarding Gollancz's comments on the book, he notes Gollancz's optimism that personal liberty and economic totalitarianism can co-exist. He worries that the intellectuals cannot see the difference between democracy and fascism, but has hope that the common people will do. The letter has one manuscript correction by Orwell, who inserts the word England where it had been omitted.

Gollancz sent the manuscript to his solicitor Harold Rubinstein to be checked for libel concerns, with Rubinstein's reply pointing out two issues, of which one is notable, taking issue with Orwell's apparent accusation that Evelyn Waugh's conversion to Catholicism was a pose, as "I happen to know that Evelyn Waugh is very sensitive on the subject of his religion". Gollancz forwarded this to Orwell, saying that he feels Rubinstein is hinting that Waugh has already taken libel action against those who question his religion. Orwell replied (preserved in carbon copy) saying that he is happy to make changes, suggesting changes to make, and that he meant to cast no aspersions on Waugh's religion. Gollancz checked the changes against Rubinstein, who approved them.

The archive next includes the most notable item, the original contract for Inside the Whale, dated 23 March 1940: four pages of typescript, initialled by Orwell at the foot of pages one, two, and three (initialled twice on the first page), and signed in full at the foot of page four. It is additionally dated by Orwell at the head of page one, and with an emendation initialled by him on page three, and finally there is a clause on page four, regarding an option on Orwell's next two non-fiction books, struck through in pen with the manuscript note "deleted EB" in Orwell's hand.

The archive continues two years later, with an extract of a letter from Moore asking Gollancz if he wishes to retain the rights to the book by publishing a new edition - Gollancz says that he does, but does not object to an essay being used for a different book. In 1949 Penguin asked to publish the book themselves, but Gollancz did not pursue this. Finally there is a carbon note from 1950 following Orwell's death saying that the rights to the book had reverted to his widow Sonia Orwell, and a carbon note to Sonia dated 1966, enclosing a copy of a letter from Orwell.

The archive of Victor Gollancz was sold by the firm's parent company in recent years, from whom the correspondence was directly acquired.

1. Carbon from Gollancz to Orwell, 1 January 1940, pursuing the book, which he enjoyed, asking for a copy of Tropic of Cancer.

2. Typed letter signed from Orwell to Gollancz, 8 January 1940, saying he cannot lend him the book as his house had been raided for banned books, and commenting on Gollancz's own comments.

3. Copies of the previous two letters, with a note saying they were in Gollancz's file for Road to Wigan Pier.

6. Copy of notes from Orwell regarding libel (no date, but January 1940), suggesting amendments.

10. Extract of letter from Christy and Moore to Gollancz, 31 December 1942 (misdated 1943), regarding publication rights.

12. Note, dated January and November 1949, that Penguin wanted to publish this book among others.

13. Carbon note stating the rights to Inside the Whale have reverted to Sonia Orwell, 3 July 1950.