Skip to the beginning of the images gallery
BIGOT, Georges. 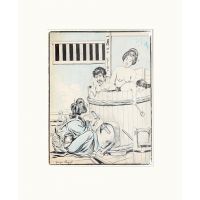 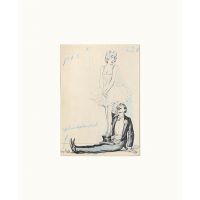 [Pen and ink sketch of a girl dancing on a gentleman's hat.]

Georges Ferdinand Bigot (1860-1927) studied at the École des Beaux-Arts, where he was trained in the studios of Jean-Léon Gérôme and Carolus-Duran. His interest in Japonism was stimulated by friendships with figures such as Philippe Burty, the art critic and collector of Japanese works, and Louis Gonse, the art historian and specialist in Japanese art. Struck by the Japan pavilion at the Exposition Universelle in Paris in 1878, Bigot decided to leave France for Japan, raising the money for his trip by illustrating the newspapers La Vie Moderne and Le Monde Parisien, as well as Émile Zola's novel, Nana. He "arrived in Japan in 1882 to study ukiyo-e in a period when the French interest in Japan had moved from an ethnographic curiosity to the perception of Japanese art as worth studying (Watanabe 1991: 123). Bigot, like most foreigners, was immediately utilised by Meiji government and worked as an art instructor in the Army Cadet Academy in Tokyo, giving lessons in perspective drawing, military weapons, topographical drawings and diagrams (Shimzu 1986: 150-1). Bigot was disappointed to encounter the impact of the 'westernisation and enlightenment' movement in Japan, however, and his interest soon turned to the common culture, which he found contrasted with the official Japanese policy Interestingly enough, Bigot, who left France faced with the difficult future of a painter, threatened by the new trends of mechanical reproduction, such as lithography and daguerreotype, employed the copperplate (etching) technique to make his work instead of painting. Moreover, the style in which his sketches are drawn is that of caricature, a style that was popular in nineteenth-century Europe, rather than ukiyo-e, which French artists had interpreted as a form of 'democratic realism' and which could have been a suitable means of expressing the artist's criticisms" (Traganou, p. 198). Having previously illustrated Japanese newspapers like Marumaru Chinbun and Kaishin Shinbun, Bigot later launched his own satirical magazine, TÔBAÉ (named after the common Japanese term for satiric art, tobae). At the turn of the century Bigot returned to France, where he chronicled the Russo-Japanese war for L'Illustration and produced copious further work for newspapers such as Le Chat Noir. Not only was Bigot a pioneer in Japanese political and social cartooning, he also did much to inject a fresh perspective on Japonism into early 20th-century European art.

[Pen and ink sketch of a girl dancing on a gentleman's hat.]