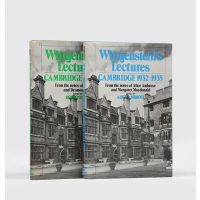 An affectionate but frustrated autograph letter signed from Wittgenstein to Moritz Schlick, the founder of the Vienna Circle, in which Wittgenstein expresses his regrets over appearing to condone the plagiarism apparent in Rudolf Carnap's most recent paper through his own inaction.
Wittgenstein received Carnap's offprint, "Physicalistic Language as the Universal Language of Science", in May 1932, which to his eyes was almost entirely derivative of his own work, and made no attempt to acknowledge his influence. His exasperation with the situation is apparent in this letter, even as he reassures Schlick of the continued progress of his own work: "As far as Carnap is concerned, I have committed a mistake by not returning the copies of his writings that he had sent me, thus, even indirectly, condoning his behaviour. In the future I will handle it differently. My work has made great progress in recent months. This last week, however, I felt a little overtaxed. I hope this will pass soon. I am very eager to talk to you about my work. I am looking forward to seeing you again". Wittgenstein expanded on these concerns in another 1932 letter to Schlick, worried that he might "soon be in a situation where my own work shall be considered merely as a reheated version or plagiarism of Carnap's" (quoted in Hintikka). These fears proved groundless, but Wittgenstein and Carnap's dispute ushered in what fellow Vienna Circle philosopher Herbert Feigl called a "profound schism in modern analytic philosophy" (quoted in Misak, p. 133), and also exacerbated the schismatic tendencies of the Vienna Circle itself, especially Wittgenstein's fraught ties to it. By 1932 his correspondence with Schlick was one of the only strands to surmount the distance Wittgenstein had established between himself and the philosophical community, a marker of the esteem both felt for each other. Upon Schlick's assassination four years later, Wittgenstein wrote feelingly to Friedrich Waismann, "The death of Schlick is indeed a great misfortune. Both you and I have lost much. I do not know how I should express my sympathy" (quoted in Monk, p. 358), and thus his main connection with the Vienna Circle was finally severed.

In bright, clean condition, the letter folded for mailing as usual with a few faint marks; the envelope slit open at top with a little light soiling to verso.