Skip to the beginning of the images gallery
EVERETT, Alexander Hill. 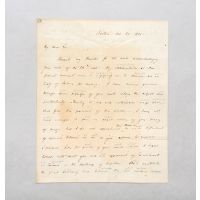 A choice letter between two of the leading American economists of the day, testimony to the emergence of an American school of economics that was explicitly conceived as an alternative to the orthodoxy of British classical economics.
The letter was initiated through the recent publication of Carey's first book, Theory of Wages (1835), which he had sent to Everett for review. Carey was evidently eager for the approval of Everett, who had established his reputation as a pioneering economic thinker with his New Ideas on Population, with Remarks on the Theories of Malthus and Godwin (published in 1823), in which he reconceived population growth as a positive dynamic factor in economic development, as opposed to the pessimism of Malthus. Everett responds favourably to Carey's publication, writing that "my occupations at the present moment are so engrossing as to deprive me entirely of time for reading. I have however glanced through some passages of your work where the subject was particularly interesting to me and anticipate much pleasure from the perusal of the whole".
Everett is particularly pleased with Carey's attack on Malthus: "I perceive from the parts of your work which I have looked into that you are an opponent of, or at least no believer in the doctrines of Malthus. This constitutes the great dividing line between the two modern schools of political economy and I cannot conceive that two persons who agree respecting this could differ upon any question of much importance".
Everett goes on to outline his own theory of wages, in distinction to those of Malthus, summing up his views as "the wages of labour are its products". He elaborates: "every individual retains in the reward or wages of his labours the whole of what he produces whatever it may be. If he gives away any part of it to his employer or anybody else, it can only be (naturally) in exchange for a fair equivalent in money or some other metal. Inequalities in wages as paid in different countries, or to different individuals in the same country are the consequences of differences in the activity and intelligence with which they labour excepting in so far as they are occasioned by political causes which in all countries distort to a certain extent the operation of the laws that naturally regulate wages but which of course may be left out of view in endeavoring to ascertain what these laws are. This is my theory in a nutshell".
Everett writes that from his perusal of Carey's work that they seem to be in agreement, and if upon a more full reading he discovers deviance, they can "compare notes and endeavour to see who is in the right". Overall Everett expresses his hope that the days of Malthus's supremacy in the field of political economy are ending, and asserts that they are in agreement as to the fallacy of his ideas: "though some of his partisans in England adhere to him with extraordinary tenacity, his day, is, I think, nearly over". Continuing his dislike of the British economists, Everett is also dismissive of Adam Smith in his theory of wages, who "did not bestow much attention upon this part of his subject and his chapter upon it is incorrect and unsatisfactory".
Everett's estimation of Carey's writing was correct; Carey would go on to spearhead the American critique of the English classical economics, with Malthus and Ricardo being subject to much attack in his later books. Overall, the letter is a fine artefact exhibiting, in a fraternal manner, the emergence of a distinctive American political economy, hostile to the English school of classical economics which was near-hegemonic in the early 19th century; an intellectual declaration of independence in political economy.