Skip to the beginning of the images gallery
DYSON, Sir Frank Watson. 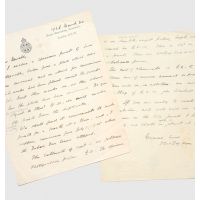 Two page autograph letter by Astronomer Royal Sir Frank Watson Dyson (1868-1939) to fellow astronomer Hugh Frank Newall, director of the Solar Physics Observatory at Cambridge, on the practical details of a joint astro-photography project. With pencilled notes by the recipient in reply to Dyson's questions.

"My dear Newall, I enclose a specimen print of Sun photograph, taken from a plate which has been measured and on which for convenience ink marks had been placed round the proofs. We keep these marks on, as they show how the plates have been measured. Do you object to these? If so, we will make the prints from the duplicates. We shall find it convenient to make prints for a month at a time, and, I suppose, commence from July 1, 1925 when the Sun Lenses stopped. The estimate of cost is as follows.

Photographic paper 8. The specimen is on double-weight paper. Single weight would be 6.10. This is 5 1/2 or 4 1/2 at present. These are Wellington & Ward's wholesale prices.

These are, of course, annual expenses. There will be, in addition, an initial outlay of 3.10 for washing tank, etc.

If you are ready to meet this expenditure, and will give us your decision on the two points I have raised, we shall be able to start at once. Yours ever, F. W. Dyson."

Frank Watson Dyson is the only person to have served as both Astronomer Royal of Scotland and Astronomer Royal. As Astronomer Royal he did important work determining stellar distances, magnitudes, and colours, and made key innovations in the observation of eclipses, including the first use of colour film and first use of aerial photography to record them. It was Dyson who first suggested, in 1917, that Einstein's theory of general relativity could be tested by observing the shift in position of stars near the Sun, an experiment that was carried out to great acclaim and public interest in 1919, making Einstein a household name.

This letter is an interesting record of early-20th century astrophotography, enumerating practices such as the marking-up of plates and precise costs of supplies. It comes from the archive of astronomer Arthur Beer (1900-1980). Beer was born in Richenberg, Bohemia (later Czechoslovakia), and educated in Austria and Germany. He worked as an astronomer at Breslau University, where he studied binary stars, and at the German Maritime Observatory. He also wrote newspaper columns and was responsible for developing one of the first scientific radio programmes, Aus Natur und Technik. Beer escaped from Germany in 1934, assisted by Einstein, who wrote him a public letter of recommendation, and spent the rest of his life in the UK. He worked at the Cambridge Solar Physics Observatory and at the Kew Observatory, and became a member of the Royal Astronomical Society. Beer's most significant contribution to science was as the founding editor of Vistas in Astronomy, a "voluminous and thorough survey of present-day astronomy" in two volumes, conceived as a Festschrift celebrating the 70th birthday of astrophysicist Frederick J. M. Stratton, under whom he had served in Cambridge. The resulting volumes were so impressive that it was continued first as an annual book and then a quarterly journal. It is unclear how this letter between Dyson and Newall made its way into Beer's archive.