Skip to the beginning of the images gallery
PUGIN, Augustus Welby Northmore. 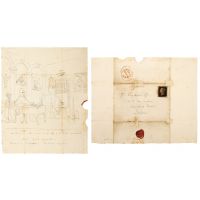 A wittily satirical sketch by Pugin, the Roman Catholic architect, sent to his friend Henry Ridgard Bagshawe (1799-1870), a prominent Catholic lawyer. Bagshawe sat on the committee of the Lincoln's Inn Fields district New Church Erection Fund. That area already had the Sardinian Chapel, well-known as the oldest Roman Catholic chapel in London and restored since the Gordon Riots, but the 1840s was a time of rapid Catholic expansion and new churches were needed. The burning question for Pugin was: should the new Lincoln's Inn Fields church be built in the continental Roman Catholic style, or in the English gothic revival style that Pugin favoured?
The sketch shows Bagshawe at his desk at 2 New Square, Lincoln's Inn, dressed in inquisitorial robes, having set aside his lawyer's wig and gown, studying the designs of Vitruvius. On the walls are two "approved" designs for round-domed Catholic churches (one of them St Peter's, Rome), while a picture of the English gothic or "pointed" St Peter's, London (i.e. Westminster Abbey) is partly torn. Around Bagshawe are instruments of torture and a display of condemned books, most of them Pugin's. The sketch is captioned by Pugin, "an old friend with a new face of a Catholic revivalist turn'd Greek inquisitor - Inquisitum 2 New Square. The torture every evening."
The same year as this letter Pugin published The True Principles of Pointed or Christian Architecture in which he championed the gothic (the title is shown in the bookcase). Pugin was evidently seeking to twit Bagshawe out of his taste for Palladian porticoes and round domes of the kind Pugin stigmatised as "pagan".
Pugin was the leading English architect to the Roman Catholic church in the early 1840s. Among his most important buildings were the Roman Catholic cathedrals of Southwark, Newcastle upon Tyne, and Nottingham, where the third Catholic bishop was Bagshawe's son, Edward. He also designed Mount St Bernard's Abbey, Leicestershire, the first monastery in England since the Reformation, and the Roman Catholic college of St Patrick, Maynooth, Ireland.
But he is best remembered for his brilliant collaboration with Charles Barry at the Houses of Parliament, which consciously echoes the architectural style of Westminster Abbey. The two men had worked closely together in 1835-7 when Pugin produced the pen-and-ink drawings from Barry's designs that won the original competition, and after 1844 would collaborate again on the actual building.
Bagshawe certainly knew Barry's work: his successful enlargement of the Royal College of Surgeons (1833) stood across from Bagshawe's chambers on the south side of Lincoln's Inn Fields. Barry had recently been commissioned by the government to rebuild the Lincoln's Inn Fields law courts, though his 1842 design (ironically in the Greek revival style, which Bagshawe would presumably have approved) was never executed.
A superb relic of the English Catholic revival, complete with a rare example of the world's first adhesive postage stamp, the Penny Black, which was only in use for a year after its introduction in May 1840.