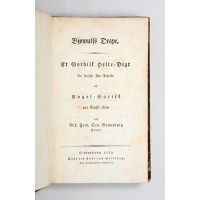 The Anglo-Saxon epic, the earliest extant long poem in Old English, survives only in a single thousand-year-old manuscript in the British Library (BL Cotton Vitellius A. XV) from the collection of Robert Cotton and gifted to the library in 1700. The volume's true value in containing this lost masterpiece of world literature, however, was only revealed by the curiosity and endeavour of Scandinavian scholars about a century later. In 1786, G. J. Thorkelin came to London to research Anglo-Danish cultural connections in the late dark ages, and uncovered the text, returning to Copenhagen with copies and working for decades (sorely hampered by war and a fire that immolated his first working manuscript) towards his Latin translation which was eventually published in 1815. Though Thorkelin's labour was key to the spread of the text, his translation was full of inaccuracies, and Grundtvig was brought in to produce this superior Danish translation from the original. Following its publication Grundtvig would travel to England three times to produce transcriptions of two further Anglo Saxon codices, the Exeter Book and the Codex Junius 11.

It is germane to note that Grundtvig's Danish translation, as well as being more accurate than Thorkelin's Latin, is also in a language much closer to the spirit of the original. Though Beowulf was written in England in the earliest form of the English language, its Anglo-Saxon author was culturally of Germanic descent - the epic relates the origins of an immigrant people, with the action taking place in 6th-century Scandinavia.

The edition is reasonably well represented institutionally, with 14 locations listed in continental Europe, but only four in the UK, and only one in the USA. It is, however, rare in the trade: no copies are recorded at auction.