Skip to the beginning of the images gallery
(FLEMING, Ian.) CONNOLLY, Cyril. 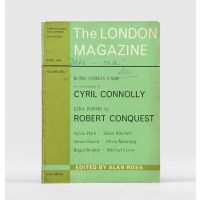 First edition of this Bond pastiche, superbly inscribed by Fleming to his close friend Richard Hughes on the front cover, "Dikko - Ouch! Ian", and with a mark in his hand next to the title of the Bond story. Richard Hughes was a good friend of Fleming's and the dedicatee of You Only Live Twice (published in 1964). In 1959, Ian Fleming was given a licence to travel. Fleming had written seven James Bond novels when he was approached by one of his colleagues at The Sunday Times with a plum journalistic assignment: to take a five-week, all-expenses-paid trip to visit the world's most exciting cities. Fleming's trip took in Hong Kong, Macau and Tokyo, then Honolulu, and home via the major U.S. cities. Along the way, he gathered material for his novels and his journalism: his Thrilling Cities tour became a popular newspaper series and a bestselling guidebook, while also furnishing much of the backdrop and research for the five Bond novels and seven short stories that would follow. In Tokyo, Fleming's local guide was Richard "Dikko" Hughes, The Sunday Times's Far East correspondent, an ebullient, hard-drinking Australian ex-boxer and part-time spy for MI6. Hughes recruited a Japanese journalist, Toreo "Tiger" Saito, to join them.

Fleming was clear about what he wanted to do. "With only three days in Japan, I decided to be totally ruthless," he wrote. "No politicians, museums, temples, Imperial palaces or tea ceremonies I wanted to explore Ginza, have the most luxurious Japanese bath, spend an evening with geishas, take a day trip into the country, eat large quantities of raw fish, for which I have a weakness, and ascertain whether saké was truly alcoholic or not." Fleming repaid his local guides by immortalising them both, little disguised, in You Only Live Twice: Hughes became the model for Richard Lovelace "Dikko" Henderson, the Australian spy stationed in Japan, and featured prominently in chapter 4, "Dikko on the Ginza": "The huge right fist crashed into the left palm with the noise of a 45 pistol shot. The great square face of the Australian turned almost purple and the veins stood out on the grizzled temples" Later, Hughes's character is described as looking "like a middle-aged prize fighter who had retired and taken to the bottle". On page 53, Fleming describes how, "that evening they had gone for more serious drinking to Henderson's favourite bar, Melody's, off the Ginza, where everybody called Henderson 'Dikko' or 'Dikko-san'." Hughes was also the model for Bill Craw in John le Carre's The Honourable Schoolboy.

"Bond Strikes Camp" is one of the earliest Bond spoofs. Gilbert notes that in October 1962 Fleming read the manuscript and was "evidently pleased and had the story typed up by his own typist, Jean Frampton". We know of just one other presentation copy of this publication, currently held in the Ian Fleming Bibliographical Archive.