Skip to the beginning of the images gallery
EDYE, John. 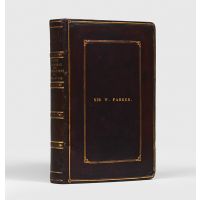 First edition, this handsome copy bearing a splendidly apposite naval provenance: from the library of Admiral Sir William Parker (1781-1866), the front cover with his name stamped in gilt, the verso of the front free endpaper carrying his pencilled ownership inscription, "W. Parker, 1835". Parker was an ally of John Edye's mentor Sir William Symonds, during the "bitter political debate on the merits of large sailing ships" designed by Symonds (ODNB). "Parker could hardly be impartial, having been largely responsible for ordering the majority of these ships while at the Admiralty under Lord Minto. His decision to fly his flag in Symonds's masterpiece, the Queen, indicated his preferences" (ibid.). Parker (1781-1866) had a long and distinguished career, summed-up by ODNB in the following glowing terms, "No officer of Parker's day made so deep an impression on the navy, by reason not of extraordinary talent but of exceptional fixity of purpose. In his youth he was considered by St Vincent and by Nelson a first-rate officer. As an admiral - in Portugal, in China, in the Mediterranean - his conduct was distinguished by skill and tact. But it was as a disciplinarian that his name was best known, not only in his own time, but to the generation that followed him; strict, but not harsh, with a fervent sense of religion and zeal for the service, ever bearing in mind the example of his distinguished uncle Saint Vincent, he made everything bend to his idea of what was right More than any other officer of his generation, the calm, confident, and courteous Parker represented the navy at the mid-nineteenth century".

Of the author, John Edye, not a great deal is known. He joined the service in 1803 and had formerly been master shipwright at Trincomalee, was the author of two books on the shipping of the Malabar and Coromandel coasts, and was first assistant to Sir William Symonds, who as surveyor of the navy following the abolition of the Board of Admiralty worked at modernising the Royal Navy by his own, sometimes controversial, lights: "Symonds relied on the talented assistant surveyor John Edye for the detailed design of his ships. Edye also introduced a new system of construction to facilitate even larger wooden warships" (ODNB). Clowes notes that he was Chief Assistant and Draughtsman to the Surveyors, an office created in 1839, Edye being the first to hold the position.

Here Edye endeavours to "give to the Sailor a thorough and scientific knowledge of the structure, powers, qualities, uses, and contents of his Ship which will shew him, at a glance what it should, otherwise, cost him much loss of valuable time and study to arrive at". An important work with a fine provenance.
.

31 engraved diagrams, 15 of them folding.