Skip to the beginning of the images gallery
LORCA, Federico Garcia. 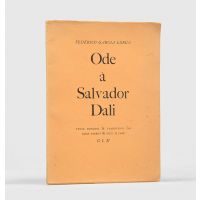 Lorca had joined a group of avant-garde artists, collectively known as the "Generation of '27". Although the group took form over several years from 1923, its first formal meeting did not happen until 1927 to mark the 300th anniversary of the death of the baroque poet Luis de Góngora. "Generation of '27," which included Luis Buñuel and Salvador Dali (with whom the poet fell in love), introduced Lorca to Surrealism, which would greatly influence his writing. In August 1936, at the onset of the Spanish Civil War, Lorca was arrested at his country home in Granada by Francisco Franco's soldiers, and was executed by a firing squad a few days later.

The recipient, Spanish writer and Dadaist Guillermo de Torre (1900-1971), moved in the same circles as Lorca, and married the artist Nora Borges, the sister of the Argentine writer Jorge Luis Borges, in 1928. After outbreak of the Spanish Civil War, they fled to Paris, and later settled permanently in Buenos Aires, where they had family. There, De Torre headed the department of literature at the University of Buenos Aires and co-founded the publishing house Losada, for which he oversaw the compilation of the Complete Works of Lorca.

Originally published at Malaga in 1927, this collection of 90 early poems is identical in contents to the first edition, and also comprises 11 sections, which include poems like "Alta va la luna," "Canción de ginete," "Verleine," "Debussy," and others.