Skip to the beginning of the images gallery
(CLAFLIN, Tennessee.) 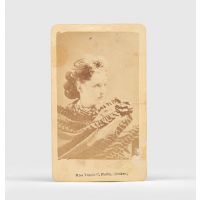 A striking portrait of Tennessee "Tennie" Claflin who, in partnership with her sister Victoria Woodhull, was America's first female stockbroker; this carte-de-visite, of head-and-shoulders length, depicts her wearing an extravagant ruffled wrap, and gives her profession as "Broker". The photographer remains unidentified. We can trace examples of this carte-de-visite - with some small variation to the formatting of the typed caption - at the Museum of the City of New York (who date it c.1875), the Smithsonian National Portrait Gallery (c.1872), and the Labadie Photograph Collection at University of Michigan.
After making a somewhat unsavoury living as clairvoyants and spiritual healers in the Midwest, Claflin (1846-1923) and Woodhull (1838-1927) moved to New York during the late 1860s. They opened their Wall Street brokerage firm, Woodhull, Claflin & Co., on January 19, 1870, to prove that "woman, no less than man, can qualify herself for the more onerous occupations of life" (quoted in Robb, p. 114). With some initial support from Cornelius Vanderbilt and the extensive publicity generated by a press fascinated with the "Queens of Finance", their firm was relatively profitable at first. Not only that, but they had cornered a source of investment capital - the fortunes and business interests of women - which other brokerages had, either deliberately or otherwise, failed to tap. During this period "the sisters began distributing their individual portraits in the form of cartes-de-visite, prominently inscribing their titles of 'broker' underneath their names" (Lemay, p. 118). However, the sisters' energies soon drifted to other causes and, helped by the Panic of 1873, the brokerage house closed its doors the same year. "However brief, perfunctory, and ultimately unsuccessful Woodhull and Claflin's brokerage career proved to be, it remains an important watershed in women's history" (Robb, p. 121).
Undeterred, Claflin and Woodhull continued to break down barriers while advocating for women's rights, labour reforms, and free love. They were among the first women to found a newspaper in America: Woodhull & Claflin's Weekly provided extensive coverage of economic issues and prided itself on exposing fraudulent dealings and corporate corruption, and it was also the first American periodical to print The Communist Manifesto. Woodhull became a national celebrity in her own right when she ran for office in 1872, the first woman to run a presidential campaign - a move which overshadowed Claflin's own bid as candidate for a seat in the New York legislature. Claflin later moved to England, married the merchant Sir Francis Cook, and became involved with the women's suffrage movement.