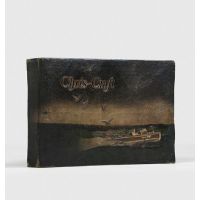 An extremely rare survival, a dealer's deluxe showroom catalogue for Chris-Craft motor boats covering the complete range - from their highly popular mahogany Runabouts to cabin and stateroom cruisers. The accompanying promotional sales letters explain that these volumes were costly to produce, and, as stock changed, additional images would be sent to replace those to be struck from the catalogue. With the additional supplied images, this is as complete an exemplar as could be wished for.
The album opens with a sequence of photographs of the famed Miss Detroit hydroplane series - Miss Chicago, Miss Detroit II, Miss Minneapolis, Miss Toronto II, Baby Reliance II & III, Packard Chris-Craft II - and others designed and built by Chris Smith, designer/racer Garfield Arthur "Gar" Wood - the first man to travel at over 100 mph on water - and Jack Beebe, chief mechanic who drove Miss Detroit to the 1915 American Power Boat Association Gold Cup. These hydroplanes went on to gather speed records and trophies around the world when, following World War I, Christ Smith invested in service surplus aircraft engines as power plant for his svelte mahogany speedboats. Other images offer a tour of the Chris-Craft factory for which Smith adopted some of Henry Ford's assembly line production methods, introducing standardised parts, special shapers, and conveyor lines moving the craft from one end of the factory to the other as the double-planked mahogany hulls were assembled, sanded, and varnished.
Fuelled by the extravagances of the Jazz Age, demand from the Prohibition rumrunners, and a growing interest in sport boating, the company expanded quickly through the 1920s. By the time this dealer catalogue was produced, Chris-Craft was offering 16 models ranging from the 22-foot Cadet runabout to a 38-foot motor yacht, and featuring the first appearance of a cabin cruiser in the company line. The 38-foot Commuter was the first yacht to introduce a flying bridge, roll-down windows, and even a rack for wine glasses. Other images include a group of 26-foot Chris-Craft built as tenders for the yachts of some of the leading figures of the day - Commodore Robert Law's Robador, Henry Ford's Sialia, Pierpont Morgan's Corsair, E.C. Benedict's Oneida, and Vincent Astor's Winchester - and Chris-Craft Cadets on the Detroit and St Clair Rivers and the coastal waters of Florida and Connecticut, one showing a runabout racing past the Battleship Iowa. An excellent sequence of eight shows the Chris-Craft display at the 1928 New York Boat Show, a crammed central trophy cabinet bearing the heading "Awarded Supremacy 1927"; an easel to one side is covered with photographs similar to those gathered here. A similar easel features in an interior shot of the company's New York showroom.
The album retains 76 of the original 88 images listed on the supplied index, together with an additional 19 replacement photographs of similar content and quality, including two prints, one of them with hand-colour, of the impressive Jeanette II, ordered by the Minnesota Marine Corporation, sitting on the flatbed truck; a Chris-Craft Model No. 3, 24-footer next to a Dee-Wite Runabout in the Gifford showroom; a publicity shot of a Bantam Austin automobile on the Detroit Yacht Club dock next to a 17-foot Chris-Craft in the water, with caption text verso headed, "A Car for Sister; a Boat for Brother". Photographers for the additional photos include Charles W. Howson of Howson Studios in Minneapolis, active during the 1930s; Sarah Hibbard, Walter Norton and Clifford Peel of Hibbard Studios, perhaps the leading commercial studio in Minneapolis; and the world-renowned marine photographer Morris Rosenfeld (1885-1968) who chronicled decades of shipping, power boating, yachting, and yacht racing. The album also includes four images of details of the Dee-Wite Runabout mahogany boats built by Dwight Lumber in the Detroit area during the 1920s. Unlike Chris-Craft, Dee-Wite were not lithe enough to survive the Great Depression. Their boats are now rare, with less than a dozen believed to survive in any condition.
A superbly produced piece, evoking the high days of classic Chris-Craft production. We have been unable to trace another similar catalogue institutionally or at sale.

A little rubbed, particularly along the edges with consequent loss of the simulated leather coating; even, quite pronounced, but not displeasing craquelure overall; the contents largely very good indeed, some of the later images with mild creasing and chipping, excellently preserved.