Skip to the beginning of the images gallery
(DARWIN, Charles.) 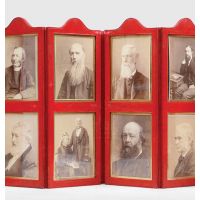 Striking and handsomely presented photographic polyptych of major British figures of the late 19th century, a number having a strong association with Charles Darwin or his "bulldog" T. H. Huxley, including Frederick Temple, archbishop of Canterbury, Sir John Lubbock, and Huxley himself.

Top row:
1) Queen Victoria (1819-1901): this fine portrait was taken by the studio of William Ernest Downey, described by a contemporary as "the doyen of British professional photographers". He first photographed Victoria in the early 1860s; "royal patronage undoubtedly assisted the firm which grew to be one of the premier society photographers of the late nineteenth century" (Encyclopaedia of Nineteenth-Century Photography, vol. I, p. 436);
2) Frederick Temple (1821-1902), archbishop of Canterbury: Temple welcomed the insights that Darwin's theory of evolution offered to religion and in an essay entitled "Religion and the Doctrine of Evolution" (published in The Popular Science Monthly, December 1884), declared that "the doctrine of Evolution restores to the science of Nature the unity which we should expect in the creation of God";
3) unidentified;
4) Ernst Haeckel (18341919), zoologist, Darwin's leading popularizer in Germany;
5) Sir John Lubbock (1834-1913): "was the closest of CD's younger friends and frequent visitor to Down House from childhood... Lubbock suggested Westminster Abbey funeral for CD and organized letter to the Dean; served as a Pall Bearer" (Freeman);
6) Frederic Farrar (1831-1903), dean of Canterbury, novelist, and philologist: "in 1860 he published An Essay on the Origin of Language ... This work, emphasizing the onomatopoeic force of primitive language and its evolutionary development, interested Tennyson and intrigued Darwin, who made use of it in The Descent of Man and proposed Farrar for a fellowship of the Royal Society in 1866. Years later Farrar controversially arranged for Darwin to be buried in Westminster Abbey and preached the funeral sermon" (ODNB); he, too, was also a pall bearer at the funeral.

Bottom row:
7) John Ruskin (1819-1900), "one of the great thinkers and critics of the Victorian period" (NPG): "1879 CD met and made friends with in the Lake District; visited his home, Brantwood, Coniston" (Freeman);
8) Sir Frederick Leighton (1830-1896), painter and president of the Royal Academy. Leighton and T. H. Huxley sat together on the Provisional Council of the National Trust in July 1894;
9) William Ewart and Catherine Gladstone (1809-1898), "the grand old man of British politics; leader of the Liberal Party and prime minister in four governments from 1848 to 1894" (National Portrait Gallery): "1876 visited Down House Darwin's Kent home in company with Huxley... 1877-79 CD corresponded with, mostly on behaviour" (Freeman);
10) Lord Salisbury (1830-1903), prime minister on three separate occasions between 1885 and 1902, married to Georgina Alderson, who "was on 'Personal Friends invited' list for CD's funeral" (Freeman), and a cousin of Darwin's wife Emma;
11) T. H. Huxley (1825-1895), known as "Darwin's Bulldog", was "a key figure in Victorian scientific life. A vigorous supporter of Darwin's theory of evolution, particularly during the famous 1860 Oxford debate with Samuel Wilberforce, Bishop of Oxford" (NPG);
12) William Booth (1829-1912), founder of the Salvation Army. Following the publication of In Darkest England and the Way Out (1890) - "a classic in the literature of poverty" (ODNB) - Booth was attacked by T. H. Huxley: "In the winter of 1890-91 the 'bulldog' spirit in Huxley was briefly sidetracked into tangling in The Times with what he felt was the dangerously authoritarian structure and financially irresponsible governance of General William Booth's Salvation Army" (J. Vernon Jensen, Thomas Henry Huxley: Communicating for Science, 1991, p. 122).