Skip to the beginning of the images gallery
(PRIVATEERING; WEST INDIES.) 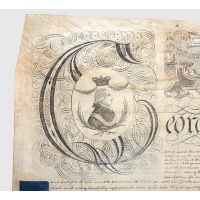 An outstanding and extraordinarily comprehensive tranche of documents, including impressive original Letters of Marque, relating to the British-built armed brig Swallow, a privateer out of Liverpool operating in the Caribbean under the experienced command of prize-master John McIver. The archive covers in remarkable breadth and detail the purchase, fitting out, commissioning, and employment of a British privateer at this period, giving a superb overview of such an enterprise.

Privateering itself is an area of some confusion. However, the ever-reliable Oxford Companion to Ships and the Sea provides this lucid explanation of a privateer: "a privately owned vessel armed with guns which operated in time of war against the trade of an enemy. The name has come to embrace both the ships and the men who sailed in her. Such vessels were commissioned by letters of marque, which licensed them to take prizes in time of war, and which served both as official letters of reprisal and bonds of good behavior" (1979, p. 670). Our documents set out this process in uncommon detail.

The accompanying letters sent out to McIver by the Swallow's owners have genuine immediacy and are frequently threaded through with a palpable sense of anxiety, reflecting the precarious nature of these operations covering thousands of miles against the backdrop of war. Through the letters a vivid picture emerges of the network of merchants, agents, officials and mariners involved with the Swallow, helping to flesh out the picture of the life of a privateer. It seems that Captain John McIver was the moving force behind the venture, for his kinsmen Iver and Peter McIver, writing to him at the outset, remark that they purchased the Swallow "solely with the View to make a profitt sic of her by a Resale" (item 4) and that "we are well pleased you have taken the Command" (item 6). The Swallow is refitted with "10 New Iron Cannon Solid Bore" (iem 7) and issued with "Letters of Marque or general Reprisals" against French, Dutch and Spanish vessels (items 1-3). Toward the close of 1796 there is an excited tone in a letter from the Liverpool ship owners Samuel McDowall & Co. stressing the urgency of McIver's sailing for the Caribbean and "the likeliest cruizing Ground immediately in search of Spanish Prizes" (item 16). The correspondence is tempered generally by a note of unease as the English shareholders continually stress the importance of receiving intelligence regarding the privateer's intentions ("You know the necessity of keeping us constantly informed of your proceedings", ibid.). There is alarm expressed at the dealings of their agent in Jamaica, who seems only to be remitting part of the proceeds due to them and that "money comes from him very slowly" (item 22), and a repeated uncertainty about the entire venture - whether to continue privateering with the risk this entails or simply to sell the ship ("we think the Swallow should sell well in the West Indies," item 32). A full listing with commentary is available on request.

The Swallow (16 guns) was built by Robert Fabian of East Cowes, Isle of Wight, and was purchased on the stocks by the Royal Navy in 1781 while building as a cutter. She was rejigged as a brig, fitted and coppered at Portsmouth and, in August 1795, purchased by a consortium of Liverpool merchants, initially comprising Samuel McDowall, Thomas Twemlow, Iver McIver and Peter McIver, (a third share was sold subsequently to the Captain, John McIver). It was John McIver who persuaded the original partners to refit the Swallow, increase the armament and obtain Letters of Marque which would allow him to cruise the Caribbean in search of "prizes". The first Letter was granted on 12 July 1796, licensing him to cruise against the French and Dutch. Following a similar commission against the Spanish (granted January 1797) her armament was increased to twenty guns and her crew increased from thirty-five to eighty officers and men. In his book on the Liverpool privateers, Gomer Williams notes that "the Swallow was not an ordinary privateer, or Letter of Marque ship, but an armed vessel, specially hired by Government". McIver met with a degree of success: whilst cruising off Léogâne, Haiti, "to prevent supplies being carried in there she sent into Port-au-Prince a large brig and schooner, laden in America, with French property on board. He took several other vessels, and saved the Fame, of Liverpool, from being captured when parted from the fleet" (ibid. p. 355). The letters also give details of McIver's other "commissions" for the Royal Navy, transporting governors and army officers. In 1797, the quasi-peace with France, following the treaties of Leoben (18 April) and Campo Formio (18 October) seem to have curtailed the Swallow's privateering career. The captain, John McIver, was a seasoned commander and a veteran of privateering. One interesting document here includes mention of the taking of a small American merchant vessel en route from Philadelphia to Port au Prince in the summer of 1793. The incident was not insignificant in that it came to the attention of Thomas Jefferson, who took up the matter with the British envoy George Hammond (see item 33 below).

The descendants of Iver and Peter McIver (or MacIver) played a key role in the establishment of the Cunard Line. In the late 1830s Samuel Cunard, impressed by the use of steam for transatlantic travel, was determined to build his own steam fleet. He failed to find backers in North America but "on seeing an advertisement in The Times, inviting tenders for a mail contract for North America" returned to Britain and put his proposals to a friend in the Admiralty who "advised him to talk to Robert Napier, the eminent marine engineer in Glasgow, who not only agreed to build ships but introduced him to the partners of a thriving coastal trading concern, George Burns in Glasgow and David MacIver in Liverpool. With capital provided by them and their friends, the British and North American Royal Steam Packet Company (later Cunard) was formed; and Cunard, in private negotiation with the government, was granted the mail contract In 1851, looking for new opportunities, Cunard joined the successful enterprise in the Mediterranean and the Levant set up by MacIver in 1849, and became a partner with MacIver and Burns in the British and Foreign Steam Navigation Company in 1855" (ODNB).

Our group of papers offers a superlative record of the career of a British privateer at a period when war between the European Great Powers meant an inevitable efflorescence of activity in the Caribbean. As N. A. M. Rodgers remarks in his magisterial history of the Georgian navy, "in the Mediterranean and West Indies the letter of marque, on both sides, was often a slender cover for piracy".