Skip to the beginning of the images gallery
(SOUTH SEA BUBBLE.) 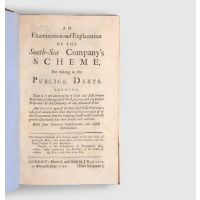 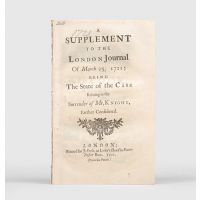 A Supplement to the London Journal of March 25, 1721; being the state of the case relating to the surrender of Mr. Knight, farther considered. 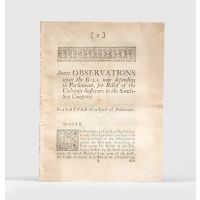 Some Observations upon the Bill now depending in Parliament, for Relief of the Unhappy Sufferers in the South-Sea Company.

Eight pamphlets relating to the South Sea Company and its collapse, six from 1720, the year in which the bubble burst, and two from the following year. The volume also includes two other pamphlets, one on the military importance of Gibraltar, the other on the need to trim the Civil List. This volume was formerly part of the Dropmore House collection of 17th and 18th century pamphlets; the spine is titled "Dropmore Pamphlets 1720" with the volume number of 17.

i) TRENCHARD, John (attributed). An Examination and Explanation of the South-Sea Company's Scheme, for Taking in the Publick Debts... London: Printed and sold by J. Roberts, 1720. ESTC T33636 (24 institutions); Sperling 148. A popular work, with three editions that year, and a sequel (Farther Examination, below) which underwent two editions. With the terminal advertisement leaf for the upcoming Farther Examination.
ii) TRENCHARD, John (attributed). A Farther Examination and Explanation of South-Sea Company's Scheme... London: Printed, and Sold by J. Roberts, 1720. ESTC T35396 (34 institutions); Sperling 201. The postscript responds favourably to the pamphlet An Argument to Shew the Disadvantage that would Accrue to the Publick..., which is sometimes attributed to Daniel Defoe.
iii) The South-Sea Scheme Detected... By a Lover of his Country. London: Printed for W. Boreham, 1720. ESTC T141288 (18 institutions); Sperling 249. A response to Daniel Defoe's The South-Sea Scheme Examin'd, which had defended the company even after the crash; the anonymous author here responds with a vituperative attack on those responsible for the Bubble, finishing with a postscript "Fable of the Birds" (a nod to Bernard Mandeville's Fable of the Bees) where the birds of prey which have stripped the other birds of their feathers are punished - it can be assumed that the anonymous author lost a lot of money in the events.
iv) The Nature of Contracts Consider'd, as they Relate to the Third and Fourth Subscriptions, taken in by the South Sea Company... By a Tradesman of the City, whose Name is not to be found in any of the Subscriptions. London: Printed for J. Roberts, J. Harding, and A. Dodd, 1720. ESTC T61274 (17 institutions); Sperling 220. This anonymous pamphlet was sometime extracted from a different pamphlet collection, with "Pamphlet no. 13" written in an early hand on the last blank page.
v) MACKWORTH, Humphrey. A Proposal for Payment of the Publick Debts, for Relief of the South Sea Company... the Second Edition Revised. London: Printed for W. Boreham, 1720. ESTC T177107 (seven institutions); Sperling only lists the first edition. Mackworth's proposals - dedicated to Robert Walpole whom he no doubt hoped would implement the ideas - proved popular, with several editions in 1720. Errata leaf present.
vi) TRENCHARD, John. A Letter of Thanks from the Author of the Comparison Between the Proposals of the Bank and the South-Sea, &c. to the Author of the Argument, Shewing the Disadvantage Which will Accrue to the Publick... London: Printed and sold by J. Roberts, 1720. ESTC T69072 (21 institutions); Sperling 149. A response to the pamphlet sometimes attributed to Defoe, which Trenchard had already responded to in a postscript to his Farther Examination (see ii), but here more responds more extensively. Trenchard is mostly in agreement with the pamphlet, which had treated him favourably.
vii) DEFOE, Daniel (questionable attribution). A Vindication of the Honour and Justice of Parliament Against a most Scandalous Livel, Entituled the Speech of John A----, Esq. London: Printed for A. Moore, and Sold by the Booksellers of London and Westminster 1721 on ESTC. ESTC T56998 (15 institutions); Sperling 271. John Aislabie was Chancellor of the Exchequer whose involvement with the South Sea Company led to his expulsion from parliament and imprisonment; a purported speech he made to the Lords justifying his conduct was published soon after, occasioning this response which vindicates parliament. The pamphlet is sometimes attributed to Daniel Defoe (ESTC cites the authorities Lee, Trent, Hutchins, Moore, Novak), but this attribution is disputed by Furbank and Owens, Defoe De-attributions 439.
viii) ELLIS. The Sense of the People Concerning the Present State of Affairs... The Second Edition. London: Printed for J. Peele, 1721?. ESTC T120123 (14 institutions); Sperling 272. "A discussion of the aftermath of the South Sea Bubble, with particular reference to the absconding of Robert Knight, cashier to the South Sea Company" (ESTC). The author is only known by the name Ellis, although the British Library narrow that down to "the son of Dr. William Ellis". The pamphlet underwent three London editions and a Dublin edition.
ix) BRITANNUS (pseudonymous.) A Letter to the Independent Whig, Occasioned by his Considerations of the importance of Gibraltar to the British Empire. London: Printed for A. Moore, 1720. ESTC T729 (12 institutions). A defence of the need to retain Gibraltar, gained by Britain in 1713, and which France was pushing to return to Spain.
x) TRENCHARD, John. Some Considerations Upon the State of our Publick Debts in General, and Of the Civil List in Particular. The Second Edition. London: Printed, and Sold by J. Roberts, 1720. ESTC T49277 (10 institutions). Published anonymously, no doubt to avoid antagonizing influential people, Trenchard's tract calls for a cutting of government expenditure on the Civil List.

A Supplement to the London Journal of March 25, 1721; being the state of the case relating to the surrender of Mr. Knight, farther considered.

Some Observations upon the Bill now depending in Parliament, for Relief of the Unhappy Sufferers in the South-Sea Company.