Skip to the beginning of the images gallery
FERNANDEZ NAVARETTE, Pedro. 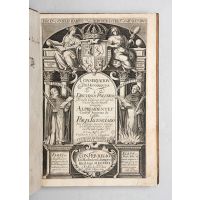 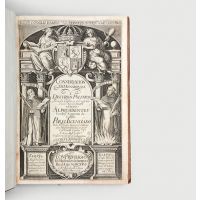 First complete edition, following publication of some discourses in 1621. Pedro Fernandez Navarette (1564-1632) was chaplain to the Spanish royal family, and an officer of the Inquisition. "The miserable state of Spain had led the supreme council of Castile to submit to King Philip III a Great Report (Gran Consulta) on the remedies to be applied; this report was delivered on February 1619, and gave rise to fifty Discursos or glosses from Navarrete, printed in 1626 at the royal press... Though a long-winded writer and rather too fond of learned quotations, Navarrete shows himself in many respects free from contemporary national and religious prejudice" (Palgrave Dictionary of Economics, vol. III, p. 7).

The book is a significant study of the Spanish economic system, which throughout the 16th century had been flush with gold from the Americas, yet despite - or because of - this was on course for three centuries of economic stagnation. Navarette proposes numerous reforms, including regulating immigration, decreasing the number of courtiers, scaling back the extravagance of the royal house, improving the lot of the peasantry, and limiting the expansion of monasteries. Navarette draws contrasts between Spain and countries like the Netherlands, which reap wealth from manufacturing despite not having access to an endless stream of gold; in his 16th discourse, he firmly argues that the value added to raw materials by human labour was more important than the value of gold and silver in an economy, and consequently promotes industrialization as the best solution to Spain's ills, rather than continuing to accumulate ever greater stocks of precious metals. In his final discourse, Navarette "concludes with a truth not much appreciated in the Spain of his days, namely that 'the councillors of kings ought not to be like cooks, who only think of dishes to please the palate, but like physicians, who prescribe bitter and stringent pills and potions'" (ibid.).

From the library of the Aragonese economist Juan Polo y Catalina (1777-1813), a member of the Real Sociedad Económica, and author of Censo de frutos y manufacturas de España é islas adyacentes (1803), with a note on the verso of the front free endpaper regarding the sale of the book to Catalina by the Madrid bookseller José Montero, signed by Montero and dated 25 May 1804.

20th-century bookseller tickets to pastedowns; frequent inked crosses in margins, occasional underling, and a couple of Spanish annotations all in an early hand, sometimes cropped. Rubbing to extremities and in patches to covers, a few sporadic instances of foxing but contents generally clean and crisp, a little closely cropped at head in places, 7 cm closed tear at foot of pp. 197/198, slight paper fault not affecting text to pp. 331-334. A lovely copy.