Skip to the beginning of the images gallery
GRAHAM, James. 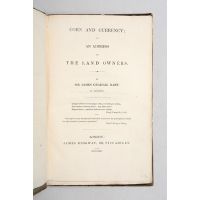 First edition. James Graham (1792-1861) inherited his father's neglected 25,000-acre Netherby estate in 1824, and spent huge sums improving it. "In the 1820s Graham was frequently pessimistic about the estate's survival, and sometimes considered selling. In consequence, he became extremely critical of the government's economic policy, particularly the return to the gold standard in 1819 which, in retrospect, he blamed for lowering rents and trapping wartime debtors in high interest payments. In 1826 he published a pamphlet, Corn and Currency, which advocated a loosening of monetary policy and a corn tariff low enough to keep down prices and wages and hence maintain the productivity of the general economy" (ODNB). "This essay made a noise in the world of politics, the more so that it was the production of a young baronet who, with an income vested entirely on land, nevertheless advocated bold, if not radical, measures affecting the metallic currency, the National Bank, the deterioration of annuities, and the removal of the restrictions on trade in corn. Sir James was praised in the commercial towns, and freely abused by the country party of England" (Lonsdale, Sir. J. R. G. Graham, 1868, pp. 54-5). The work proved a popular contribution to the raging Corn Law debate, and underwent five editions in two years.
Provenance: George Smith (1765-1836) of Selsdon Park in Surrey, with his ownership inscription dated 1826 to the front pastedown, with his pencilled notes to final blank, and a few pencilled marginalia in text. Also with the neat stamp to pastedown of the Lawes Agricultural Library, assembled in the early 20th century by Sir John Russell, director of the Rothamsted agricultural research institution in Hertfordshire, and which ranked as one of the finest English collections of agricultural material.