Skip to the beginning of the images gallery
BUCCI, Anselmo. 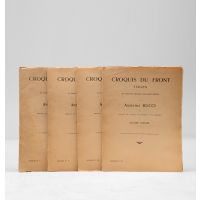 First edition of 125 copies only, this one of 100 on Hollande, after 25 on japon. Extremely uncommon, OCLC lists only the 1997 reprint, just one copy at auction over the last 40 years. Superb series of etched illustrations of life on the Italian Front as a member of a volunteer cyclist battalion. Born in Fossombrone in the Marche, Bucci (1887-1955) attended the Accademia di Belle Arti di Brera in Milan from 1904 to 1905, before moving to Paris in 1906. He debuted at the Salon des Art Décoratifs in 1907 with a number of symbolist works with marked Fauvist overtones, and took part in the Salon des Indépendants from 1910 on. In 1915 he enlisted in the Volunteer Cyclist Battalion alongside Bocchioni, Marinetti, Piatti and Sironi, a very Futurist gesture, and his first solo show - Famiglia Artistica, Milan, 1915 - took place while he was on leave. Following the war he fell in with the "return to order" movement, took part in the Venice Biennale, first at the 12th Esposizione Internazionale d'Arte di Venezia in 1920 and then again in 1924, when one of his exhibited works was bought for the city's Ca'Pesaro gallery of modern art. Under the influence of the writer Margherita Sarfatti, Bucci was one of the founding members of the Sette pittori del Novecento, established to "launch a new art that would give Fascism a distinct cultural identity rejecting romantic sentimentality, naturalistic representation, and psychological introspection, in favour of a stern, controlled style of expression that celebrated technical progress, modern dynamism, heroic action, and individual intelligence" (Sarti, Italy: A Reference Guide from the Renaissance to the Present, p.445). He took part in the group's first show in 1926 but not the second. During the 1930s, when he divided his time between Milan and Paris, he abandoned neo-classical rigidity in favour of a freer, more expressionistic style. He was later to remark that; "Non ho mai cercato di mentire in uno stile, ma di dire la verita' in lingua corrente" - "I never tried to lie in one style, but to tell the truth in the current language."

First fascicle containing two bifolia with letterpress preface in French and Italian, and two - different - small etched illustrations to each, together with a total of 54 etchings, signed, titled, and numbered by the artist in pencil.

Wrappers browned and separating at the spines, but complete, first and last sheets in each fascicle showing marginal browning due to contact with wraps, very occasional light finger-soiling, but overall very good.