Skip to the beginning of the images gallery
ELIZABETH, Princess of the United Kingdom.

In a Series of Prints, Designed by *****; and Engraved by W. N. Gardiner B.A. with Poetical Illustrations by Thomas Park, F.S.A. 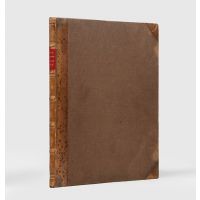 ELIZABETH, Princess of the United Kingdom.

First edition, signed by "Elizabeth" on the half-title. Published at the height of the Georgian volunteer movement for the war against Napoleon, this book contains a series of engraving based on drawings by Princess Elizabeth, daughter of George III, showing cupid training to fight the French. Each picture depicting scenes of "Genius, Loyalty, and Patriotism" is accompanied by a short poem by Thomas Park, an antiquary and bibliographer, who had published his Sonnets and Other Poems in 1897 and was admired by the poet Southey, who said his "knowledge of English bibliography, and English poetry in particular, have never been surpassed" (ODNB).
In the period 1803-04 almost 400,000 people enrolled as volunteers to fight for Britain. This books is a good illustration of the patriotic fervour in the time "when every Briton who handles the sword or pen, is loudly called upon to exercise them in defence of all that can be held dear" (Preface).
At the time, Princess Elizabeth was living a secluded and sedentary life, confined to what was known as the "Nunnery" as her father's madness grew worse. She occupied herself with art, and drawing pictures of Cupids became something of a speciality. In 1804, Edward Harding, the royal librarian, published this book, with engravings by his protegé W. N. Gardiner, a man of great "eccentricities of dress, behaviour, and conversation" (ODNB) and, for a while, a successful bookseller and engraver with a shop on Pall Mall.
Eventually marrying in 1818, Elizabeth escaped the royal home at the age of 48. Park devoted himself to antiquarian work and parish life. This book was to be Gardiner's last work. He gave up his work due to eye trouble and then "his wife and child having died, lost interest in his appearance and became a recluse", finally committing suicide in 1814 (ODNB).

ELIZABETH, Princess of the United Kingdom.