Skip to the beginning of the images gallery
WEBSTER, Mrs Alfred.

With Remarks on Deformities and their Prevention and Cure. 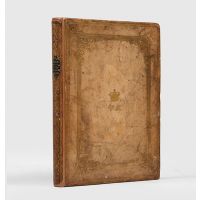 First and sole edition, in a lavish, if somewhat compromised, binding by the fashionable London bookbinder James Hayday, apparently intended for presentation to Queen Victoria, carrying her crowned monogram to sides. Victoria's passion for dancing is well attested; on her fourteenth birthday she took "considerable delight in a rare opportunity to expend her frequently repressed energies in the quadrille and the waltz The state visit of Grand Duke Alexander of Russia in May 1839 provided another memorable evening's dancing for Victoria, when she found herself twirled round the ballroom by the grand duke in a mazurka, before taking delight in the quadrille, the valse, and the new German dance, the Grossvater" and even in old age "when she danced she was transformed; her energies seemed undiminished She could still dance the quadrille with grace" (Helen Rappaport, Queen Victoria: A Biographical Companion, 2003, pp. 113-14).
Mrs. Webster ran the Cheltenham Dancing Academy before becoming dancing-mistress at the Ladies' College, where she "drilled the girls, and taught them to walk gracefully. Mrs. Webster insisted on all pupils attending the afternoon dancing class in white satin shoes and silk stockings, and was so majestic that even the headmistress Miss Proctor was in awe of her" (Florence Cecily Steadman, In the Days of Miss Beale, 1931, p. 7). Her book is a celebration of the improving capability, both moral and physical, of the practice of dance, as well as an attempt to "rescue it from the censure cast upon it in consequence of its abuses" (p. 1), making the serious point that there is a "want of exercise in female education". She discusses the quadrille and the minuet, the waltz (valse) and the polka, and under the chapter heading "On Deformities too great for mere Dancing Exercises" recommends the use of various devices for the straightening of the spine, particularly the "extremely valuable apparatus the 'Bascule brachiale,' a pulley-swing invented by Colonel Amaros, the founder of the Gymnase Civile et Militaire at Paris"; although she reserves her highest praise for that "most perfect invention", the "Prone Couch", invented by "Mr. Cole, surgeon at the Orthopaedic Hospital". She opposes the corset vehemently: "I invariably urge their wear being discontinued by all ladies, old and young" and recommends "a close-fitting body of stout jean made to lace up in front". Her message could be summed up as mens sana in corpore sano.
Loosely inserted is an unrecorded broadside poem entitled "The Cheltenham Dancing Academy, March 1860" (folded bifolium, printed on pages 1 and 2 only), which gives an amusing picture of Webster taking a dance class, naming a number of the girls, describing their attempts at quadrilles, waltzes, minuets, and the Lancers (a form of quadrille) and giving a memorable picture of the awe-inspiring Mrs. Webster herself: "The door then opens, and in comes, / All queenliness and state, / The Mrs. Webster, all a blaze, / And followed by her mate".