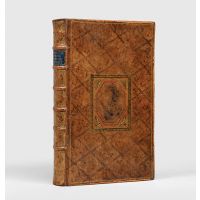 An extraordinary example of one of the most significant illustrated Cervantes editions of the 18th century; a fine, large paper copy of the lavish 1746 Hague edition of Don Quixote, each of the 31 copperplates here beautifully illuminated by a contemporary hand and heightened with gold, presented in an elaborately worked Dutch binding.
The grand size, wide margins, and exquisite hand-colouring of the present copy render it unique. None of the copies (in either Dutch or French) examined in the standard bibliographies are recorded as having hand-coloured engravings, and a comparison of the very small number of "grand paper" copies known shows that none have been recorded with the present dimensions. The largest size appears to have been of small folio stature, as Brunet, Cohen/de Ricci, and Boissais note. The catalogues of some of the greatest book collections describe copies in "Klein-Folio" or quarto format (for example, the libraries of Béraldi, Rahir, Giraud-Badin, and Esmerian); the copy from Hans Fürstenberg's library measures 350 mm high.
The first complete translation into Dutch of Don Quixote first appeared in 1657, translated by Lambert van den Bos (1620-1698) and published in Dordrecht by Jacobus Savry. Van den Bos's translation was successful, and went through seven editions up to 1732. "Possibly it was the prospect of (commercial) success that motivated the new translation ('version' or 'adaptation' might be a more appropriate term) of Cervantes's novel, in 1746 by Jacob Campo Weyerman 1677-1747. Being in prison at that time, Weyerman was asked by the Hague editor Pieter de Hondt to translate a French abridged version of Don Quixote into Dutch The text provides a random anthology of adventures", with some passages a literal translation, and others much truncated, so as to make room for the copperplates (Van Gorp, pp. 161-62).
Between 1715 and 1720 Charles Coypel (1694-1752), painter to Louis XV, produced a series of 28 paintings depicting scenes from Don Quixote that are considered his greatest works. At Coypel's direction, 25 large-folio engravings of these paintings were published in 1723-24. Their popularity established Coypel's position as the most influential 18th-century illustrator of Cervantes's novel. "It is not too much to say that the pictorial tradition associated with Cervantes's masterpiece owes as much to Coypel as to any other artist" (Ray, p. 13).
It is this suite of engravings, plus six after other leading artists, that De Hondt chose for his adaptation, engraved by the best illustrators of Dutch and French books of the time. Their importance is evidenced by the ways in which the publisher and Weyerman reduced the text in order to accommodate the large plates, though they were still much smaller than the originals.
De Hondt published a French edition the same year, under the title Les principals avantures..., but the Dutch edition is preferred. Bibliographer M. E. Crottet, cited in Ashbee, asserts the priority of the Dutch edition over the French: "Les exemplaires de choix ont le texte encadré. Les premières épreuves des figures ont paru dans l'édition hollandaise Elles sont bien supérieures à celles de l'édition français, même dans l'état avent les numéros." ("The copies of choice have the framed text. The first proofs of the figures appeared in the Dutch edition They are far superior to those of the French edition, even in the state before the numbers".) De Hondt's edition is also notable for its inclusion of the first biography of Cervantes to be published in Dutch, written by Gregorio Mayans and first published in Spanish in 1737.

In fine condition; entirely without spotting, the illuminations exceptionally fresh, the binding with some very minimal marks and rubbing, joints a little weak but remaining firm, some chips and uneven edges to tissue guards.