Skip to the beginning of the images gallery
BOCCACCIO, Giovanni.

Framed in Ten Dayes, of an hundred curious Pieces, by seven honourable ladies, and three noble gentlemen. Preserved to Posterity by the renowned John Boccacio, the first Refiner of Italian prose: And now translated into English. 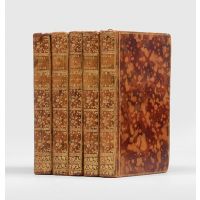 The Decameron in English: second edition in English of volume I; first edition of volume II, as most often. The translation is attributed by some on stylistic grounds to John Florio. Boccaccio's Decamerone, a collection of one hundred novelle composed between 1348 and 1351, was hugely influential in England, its canonical status reinforced by the imitations of Chaucer, Shakespeare, Dryden, Keats, and Tennyson, yet Boccaccio's masterpiece nevertheless came to the English language late, significantly later than the first translations into French, Spanish, Catalan, and German. Florio apparently worked with both the Salviati (1582) edition of the Decameron and Antoine Le Maçon's (1545) French version to hand. He shows some uneasiness in presenting the Italian novelle to an English readership and amending a Catholic author for a Protestant audience. Moral applications are interjected between the brief summaries of the tales and the novelle themselves, and the names of some characters are anglicized or given in French forms. The translation is dedicated to Sir Philip Herbert, the future fourth Earl of Pembroke, whose father had been tutored by Florio.
The first volume was first published in 1620. The second volume has a separate title, The Decameron containing An hundred pleasant Novels. Wittily discoursed, betweene seven Honourable Ladies, and three Noble Gentlemen. The last Five Dayes, also dated 1620, but the 1625 title page of the first volume is specifically worded as a general title for the whole work, implying that Jaggard intended this edition to be issued thus, two volumes in one. Isaac Jaggard was successor to his father William, best known as the printer, in 1623, of the first folio of Shakespeare's plays, which recent scholars have suggested was edited by John Florio.

Titles within woodcut borders, the border to volume II composed of 6 woodcut medallions repeated as vignettes throughout both volumes, decorative woodcut head- and tailpieces and initials, typographic head- and tailpieces. Without first and last blanks in