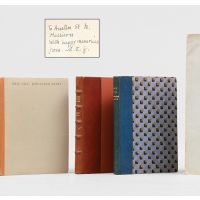 A remarkable collection, including the dedication copy of the From the Jerusalem Diary, inscribed by the editor, Mary Gill, Eric Gill's widow, "To Austen St B. Harrison, with happy memories, from M.E.G.", with the Eric Gill-designed bookplate of Austen St Barbe Harrison to the front pastedown. Harrison, a close personal friend of Gill (1882-1940), was the architect with whom he collaborated on the design for the Rockefeller Museum in Jerusalem. In 1934, Gill was commissioned to carve ten panels for the museum, sculpt the fountain in the Central Court, and carve the English, Arabic, and Hebrew letters of the inscriptions throughout the building. Gill's designs symbolized "the civilizations of that have most affected the history of Palestine, together with the tympanum over the main entrance". The extracts from the diary he kept during his time there were published posthumously by his widow.
It was preceded by an earlier version, From the Palestine Diary, printed by the Hague & Gill Press in 1949, of which two copies are here present. The Palestine Diary was subsequently abandoned, and only a small number of copies of the aborted edition now survive. René Hague, Gill's son-in-law, co-founder of the Press, and master printer, initally printed the sheets for the Harvill Press. However, "delays occurred and cancel title pages were printed ... dated 1951 and 1952 with the imprint 'High Wycombe Hague Gill & Davey Ltd" (Gill, pp. 87-8). These are present here, bound into copy (b). Bookseller G. F. Sims later purchased the surviving sheets and had them bound up by Sangorksi & Sutcliffe. In two letters to Harrison, Gill's other son-in-law and stone-carving assistant, Denis Tegetmeier, discusses the abandonment of the publication. Writing from Pigotts, Gill's home and workshop in High Wycombe, he explains that "there was an edition printed here but never bound or published, and minus the illustrations ... I think the crisis which finally overtook the Press was responsible for the failure" (2 January 1959).
The shortened version of the Palestine Diary, entitled From the Jerusalem Diary, was finally printed in 1953 by Linotype, with illustrations from photos of Gill's carvings. In Tegetmeier's second letter, dated 12 February 1959, he stresses the differences between the two publications: "the edition which was hand-set & printed here has really nothing to do with that printed by Linotype, which was produced privately, chiefly as a display of Eric's type 'Pilgrim' which they had recently acquired. The plan for producing an edition here, which was a much earlier & entirely different venture, proved abortive owing to the breakup of the Press & lack of funds to finance the binding etc. No blocks for the illus. were made & it only got as far as the printing of the letterpress".
Accompanying the books are several pieces of correspondence from Mary Gill to Harrison: (i) Christmas card (1955), featuring a photo of Gill's carving of The Good Samaritan (1938) for Coventry Hospital, which was bombed in 1941; (ii) Christmas card (1960), featuring Joseph and the Child, with (iii) an autograph letter signed from Mary Gill, dated 21 December 1960 ("I feel very much immersed in our industrial world - of 1960 - with its noise, commercialism - and dangers...I know Eric would have hated it!"); (iv) poignantly, an autograph letter signed from Joanna Hague (Gill's daughter and wife of René Hague), dated 25 July 1961, informing Harrison of her mother's death on 22 March that year: Joanna explains the delay in writing to him ("I couldn't find your address among Mother's papers, but Bernard Wall ... was able to give it to me ... I don't think he knew what a close friend you were").

Calligraphic bookplate of David Potter, designed by Reynold Stone, to front free endpapers of Jerusalem Diary and one copy of Palestine Diary. Very minor fading to spines and board edges, a little faint foxing to prelims, closed tear to p. 35 of Palestine Diaries, partly affecting text. A very good set.