Skip to the beginning of the images gallery
BLOCH, Jan Gotlib. 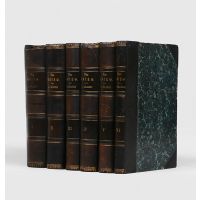 First edition in German, first published in Russian the year previously with a French translation issued the same year. Never fully translated into English, an "abridgement," actually a full translation of the final volume, the General Conclusions, was published in 1899 with an introduction by W. T. Stead under the title "Is War Impossible?"
Bloch's uncommon book is a classic of 19th-century analytical thought. In January 1916 The New York Times carried a lengthy article headlined "Prophet of Trench Deadlock Vindicated. Ivan S. Bloch, who wrote seventeen years ago, foresaw 'Stalemate' like that on Western Front today, and made many more excellent guesses" - a summary which, in trying to give credit, belittles one of history's most original, but clearly unappreciated thinkers.
Jan Gotlib Bloch (1836-1902) was born into a poor Jewish family in the Kingdom of Poland, and made a fortune investing in railway development in Russia. His work on the scientific management of railways won a medal at the Paris Geographical Exhibition on 1875. In 1878 he completed a massive five-volume work analysing the economic condition of Russia with special reference to the impact of the railways, which he followed in 1882 with an apologia for government financial policies in the 19th century, and a monumental investigation into the conditions of life and industry in various regions across Russia, which also addressed the issue of origins of anti-Semitism, and the role of Jews in Russian life.
By 1873 Bloch was married to the niece of the richest financier in Poland, owned his own bank, and was president of the Warsaw Stock Exchange. But the outbreak of the Russo-Turkish War in 1877, Bloch's contacts with the war ministry during railway construction, and his participation in the special committee preparing Warsaw for siege all concentrated his mind on the likely consequences of warfare among the advanced industrial nations. Shortly before his death he retired from the business world and, applying the same statistical methods he had perfected in his analyses of industry and finance, "immersed himself in the study of modern war" (Gat, The Development of Military Thought, p. 109).
For eight years Bloch collected and collated data from a wide variety of sources and consulted Russian military experts, filtering the results through his own peculiar intelligence. "He brought to the study of war an entirely new sort of mind, one in which the analytical skills of the engineer, the economist, and the sociologist were all combined. His book was in fact the first work of modern operational analysis." Bloch foresaw the domino effect caused by the complex tracery of alliances; the creation of an "impassable zone of fire deadly in equal degree to both the foes" on the battlefield; and the disruption caused to the complex interdependencies of the world economy which would be ruinous to the participants, bringing "even upon the victorious power, the destruction of its resources and the break up of society", a prescient forecast of the astonishing ripple effect whereby the assassination of a minor aristocrat would lead the Great Powers to the verge of mutually assured destruction.
As an avowed pacifist Bloch's rational analysis was certainly influential on the world "peace circuit", but the pre-Great War impact of his work in military and political circles was negligible, recognition coming late and generally grudgingly. Perhaps the most apt plaudit came from another eminent forecaster, H. G. Wells, who at the time that the New York Times was congratulating Bloch on his "excellent guesses," described him as "the prophet who emerges with the most honour from this war." Wells also chastises the Allies for their failure to read him with profit, noting that: "His book was very carefully studied in Germany. As a humble disciple of Bloch I should have realised this, but I did not, and that failure led me into some unfortunate prophesying at the outbreak of the war. I judged Germany by the Kaiser, and by the Kaiser-worship which I saw in Berlin. I thought that he was a theatrical person who would dream of vast massed attacks and tremendous cavalry charges, and that he would lead Germany to be smashed against the Allied defensive in the West I did not properly appreciate the more studious and more thorough Germany that was to fight behind the Kaiser and thrust him aside, the Germany we British fight now, the Ostwald-Krupp Germany of 1915. That Germany, one may now perceive, had read and thought over and thought out the Bloch problem" (What is Coming?)

Profusely illustrated throughout with plates, plans and diagrams, many of them folding, illustrations and tables to the text, many full-page.