Skip to the beginning of the images gallery
[VIANA, Francisco Javier de.] 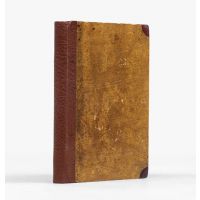 First and only edition of the first published account of "Spain's greatest scientific voyage of exploration to the South Seas in the eighteenth century" (Hill). Rare: 20 copies in libraries world-wide (none in the United Kingdom) but just a handful of copies traced at auction. Lada-Mocarski considered that "Viana's diary is of immense value. It is the only full and detailed printed account of Malaspina's voyage from California to Alaska by one of the participants". The author was an ensign on the expedition and later settled in Uruguay, where his account was printed on the travelling press of the army besieging Montevideo during the war between Argentina and Uruguay, which partially explains its great scarcity today.
Setting out in 1789 and returning to Cadiz five years later, Italian-born Alessandro Malaspina, accompanied by Bustamente y Guerra, sailed throughout the Pacific, exploring and mapping much of the west coast of the Americas from Cape Horn to the Gulf of Alaska, then across to the Philippines, with stops in Australia and New Zealand. While the Malaspina expedition was planned as the Spanish answer to Cook and La Pérouse, the ill-advised involvement of the commander in a court intrigue once back in Madrid led to his imprisonment and the complete suppression of the planned official account, including its scientific results. "The results of his expedition, which included sixty crates of specimens for the Madrid Museum, were lost in the archives and not fully investigated for another eighty years, when Pedro de Novo y Colson published an edited version of his journal A comprehensive edition of Malaspina's journal did not appear until 1990" (Howgego).
Viana's account is also of considerable Australian importance. The Spanish visit to Port Jackson came only five years after the foundation of the colony and caused considerable interest in Sydney: Collins, for example, gives an extended account of their visit. One expedition member wrote to Sir Joseph Banks of "the very extraordinary humanity and kindness with which the English in their new Colony welcomed us" and while there the scientists made good use of their time. The artists also made a very fine series of drawings at Port Jackson, a valuable record of the state of the colony and including the only known depictions of convicts at that period. Viana's extended account of Sydney at this crucial time is one of very few published (and unpublished) accounts of the infant colony by an independent eyewitness. The Port Jackson section occupies pp. 258-66 here. It was not republished until 1967 when a small edition of the section on Port Jackson was published by the Australian Documentary Facsimile Society.

From the collection of Kenneth Back, meteorologist with the British Antarctic Survey from 1963 to 2002 and recipient of the distinguished Fuchs Medal in 1979 and the Polar Medal the following year, with his bibliographical notes laid in. Extremities very lightly rubbed, a few small marks towards top edges of boards (perhaps from varnish), text-block toned as usual, sigs. 45-55 browned, light spotting to contents pages and very occasionally to text, very short closed tear to gutter of front free endpaper, upper outer corner of sig. 13 eroded, sigs. 29[a] and [b] transposed, small spill-burns causing minute holes to fore margin of sig. 52, and to lower margins of sigs. 84-5, the text never affected, faint creasing to lower outer corners of sigs. 64-7, sig. 85 shaved at head, partially cropping pagination. Overall a very good copy of a fragile publication.